You are here: Home / Commentary / Jazz Commentary: Chet Baker — The Climax of Cool

For most of its history, jazz has been a macho culture. Sexual ambiguity or gay-ness were subjects of derision.

We think of the 1950’s as a time of relative social conformity and fixed gender identities. But, in fact, major cultural shifts were underway. Male stereotypes were being unpacked and, to some degree, unfrozen. Where films and music once gave us male characters that were either hyper-macho and worthy of respect or limp-wristed objects of derision, male characters and performers who could express emotional vulnerability began to emerge. In film, James Dean personified this shift. In music, it was Frank Sinatra and Chet Baker, who both created music with a heightened sense of male emotional vulnerability. However, a closer look shows that Baker made a more radical break with male stereotypes.

Sinatra, with his arrangers Billy May and Nelson Riddle in In the Wee Small Hours (1955) and Songs for Swingin’ Lovers! (1956) bridged a gap in popular music. They showed that songs could swing and still deliver an intimate romantic message. To that degree, Sinatra did stretch male stereotypes, but he remained within the boundaries of older, explicitly macho imagery, a scion of the “crooner” tradition that began with Bing Crosby and continued through swing era singers like Ray Eberle and Vaughn Monroe. Chet Baker, however, pressed towards an androgyny that upended this imagery and this got a surprising amount of traction in American culture.

Stylistically, Baker was also a successor to the style first espoused by Bing Crosby in the late ’20s. Chet Baker’s style of singing on Chet Baker Sings (1954) finished off what Crosby started. The latter had initiated the movement from “hot” to “cool” by teaching singers how to generate a more intimate sound by using the microphone. However, although Crosby’s style was relatively laid back, he still used “hot” techniques, such as vibrato, slurring, and small ornamentations to “sell” the tune. This continued to be the standard, but Baker took coolness several steps further, either eliminating or dramatically taking down the heat of these techniques. Also, in the timbre of his voice, he did not sound like a man singing was supposed to. And, unlike Crosby, whose voice lowered into a comfortable baritone, Baker’s voice never varied as he aged. From the start,  fellow musicians, friends, and critics were negative. It took guts, and possibly some measure of obliviousness, for Baker to shut these voices out and continue to sing.

There was nothing strange about the idea of Baker, as a trumpet player, taking up singing. He took his place in a long line of jazz trumpet players who sang. Louis Armstrong, Jabbo Smith, Roy Eldridge, Bunny Berigan, Louis Prima, Hot Lips Page, and Dizzy Gillespie were all proficient vocalists. They thought of themselves as entertainers, liked to vocalize, and were happy to give their chops a break. Almost all these guys specialized in a ballsy approach, sometimes ironic or sly, often bluesy. Armstrong had romantic tunes in his repertoire, but there is an artfulness in play that separates the singer from the object of his affection. In the later phases of his career he sang with great tenderness. Berigan’s style was lighter than the others. Tellingly, even after he had a hit with “I Can’t Get Started,” he almost always deferred to a band singer, content to play. Baker’s singing style was the first in this lineage that said out loud: “This is what it means to be vulnerable.” 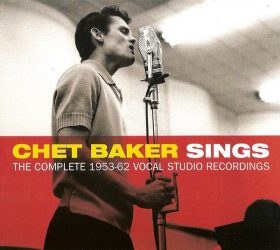 As with the other trumpet player-singers, there was a strong connection between Baker’s instrument and his voice. His playing was distinguishable from, but similar to, the approach of others in the ’50s, like Jack Sheldon, Don Fagerquist, Don Joseph, Tony Fruscella and John Eardley. Of these, only Sheldon also sang. His voice was better than Baker’s, but his singing style ranged from cooing drollness to belting. To Sheldon, romantic meant sexy, while Baker was never so indiscreet, or overt. His sexiness was hidden below layers of romanticism and self-protection.

Rhythmically as well as in note choice, Baker’s singing paralleled his playing. But the fragility, tremulousness, and high tenor range of his voice amplified the tune’s vulnerability. The only voice like it belonged to (Little) Jimmy Scott, who had a hit in 1950 with Lionel Hampton’s “Everybody’s Somebody’s Fool” and who showed up in that same year with Charlie Parker, singing “Embraceable You.” But, although his voice was as “non-masculine” as Baker’s, Scott sang with all of the heat that Baker eschewed.

Reading about Baker’s foray into singing is like wading into a critical abattoir. As noted, almost no one liked it — musicians, friends, or critics.

There are conflicting stories about how Baker’s vocals were initially recorded. Some insist that the trumpeter demanded it and the owner of the Pacific jazz label, Dick Bock, balked. Others say that Bock wanted it and Baker resisted. Either way, Baker’s inexperience (or ineptitude) made for innumerable retakes, marathon sessions, and a lot of audio cutting and pasting.

Two musical elements were not subject to carping. One was Baker’s phrasing, which rhythmically paralleled his adept playing. The second was his scatting note choice, which reflected the melodic gift he displays in his trumpet solos. As for the criticism, Baker was accused of singing out of tune. I’m pretty sensitive to people staying in tune and I don’t hear the problem often, except on some held notes — the hardest to sing in tune, and beyond his vocal support system.

Naysayers also blasted Baker’s lack of affect, charging that it lacked emotional weight. This accusation was often accompanied by an analysis of Baker’s life choices — drug use and callousness toward women. People like the artist’s life to harmonize with the qualities they find in the art — and both positive and negative projections about Baker were intense. He was worshipped and reviled. Some thought he sang and looked like an angel. Others saw him nod out or heard about him acting like a cad and detected that in the music (Such critiques were not unknown to Sinatra, as well).

What I think made critics, fellow jazz musicians, and many men particularly uncomfortable is that Baker didn’t sing like a man. Much was made about the girlish, non-masculine quality of his voice. I’ve heard people ask, when they’ve heard Baker sing, whether it was a man or a woman. He has a light tenor voice, not dissimilar in range to people like Nat Cole or Mel Torme. But Baker’s voice was all “head” and no “body.”

For most of its history, jazz has been a macho culture. Sexual ambiguity or gay-ness were subjects of derision. Baker was heterosexual, but for him to sing the way he did was almost, in a sense, to “come out.” Of course, Baker wasn’t consciously making a political-sexual point. When he responded to interviewers who challenged his masculinity, he made certain to reaffirm that he liked girls, not “fellers.”

Moving from just playing the trumpet to becoming a jazz vocalist/leading man while grappling with the negative response from critics as well as from fellow musicians did not make continuing to sing easy. It is not clear as to whether Baker was or was not using heavy drugs before Chet Baker Sings, but there’s no doubt that he became more deeply enmeshed in heroin and speed during this period. There is a strong possibility that drugs, as well as the incredibly strong response by women to his singing, were two key elements in helping Baker weather the brickbats and continue to sing.

Baker’s repertoire was standards and the great American Songbook. It’s appropriate that the most famous of his vocal renditions is of “My Funny Valentine.” In this Rodgers and Hart tune, we have a perfect match of performer and song. This is a song that spells out the imperfections of the lover (“is your figure less than Greek, is your mouth a little weak, when you open it to speak are you smart”). Examine the title itself — my “funny” valentine. The conceit is not that the lover is funny/humorous, but funny as in-how did this happen-how did I end up with someone like you? This is love as mystery, song as mystery, sung by a musician whose life was lived publicly, but who was himself enigmatic. Yes, we know the biographical facts of Baker’s life, but his inner life was shrouded in layers of romanticism, self-protection, and listeners’ projections.

But I contend that Baker significantly changed the psychic and cultural “field,” and in so doing influenced those singers and others who came after. He brought the ethos of cool to a revelatory climax, moving into territory that had once belonged only to female vocalists. He opened up the emotional palette of male singers. They had previously shied away from vulnerability — now they were more likely to draw on that emotion.

Revealingly, Baker remained completely un-ironic as a vocalist. He always sounded sincere — never a wink or a nudge. So the singer was a paradox: a drug addict and philanderer, Baker created considerable distance between himself and others, yet he transmuted this distance into a kind of intimacy that had rarely, if ever, been expressed in the pop-jazz male voice.