You are here: Home / Books / Book Review: “The Dogs of Inishere” — The Ambiguities of Desire

In many of these yarns, Alannah Hopkin demonstrates a near impeccable sense of craft, including a talent for coming up with surprises. 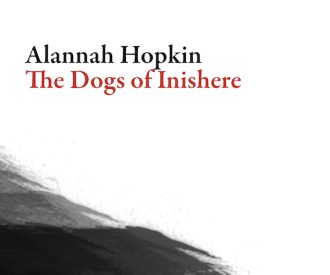 I’ve spent some time in the west of Ireland. Galway, west Cork, the Aran Islands — these are places I’ve come to love, locations with a powerful imaginative allure. I am not the only one who has become enamoured with the dramatic landscape of the Burren, the dulcet Cork accent, and the snippets of Irish one overhears in pubs. W.B. Yeats and Lady Gregory went west collecting folklore and myths for Celtic Twilight, leading the way for Alan Lomax and his tape recorder. The poet, scholar, and travel writes Louis MacNeice describes the west as “the world of second sight.” In his poem “Dreamland,” he observes:

To the tourist
This land may seem a dreamland, an escape,
But to her sons and even more her daughters
A dream from which they yearn to awake; the liner
Outhoots the owls of the past

These lines compactly characterize how the west is viewed by outsiders, at the same time recognizing how the land’s culture has been impacted by economic hardship and emigration.

Clearly the west is contested territory, caught between different kinds of abundance and deprivation. These tensions may help explain why it is a popular destination in literature and in life. In her first ever collection of stories, The Dogs of Inishere, novelist, travel writer, and critic Alannah Hopkin captures in elegant, distanced prose how dreams meet reality in rural Ireland. In many of these yarns she demonstrates a near impeccable sense of craft, including a talent for coming up with surprises.

Hopkin humanizes the magic of the west, brings it down to earth. The stories are quiet and reserved, often set in quiet, often desolate, places. Having lived in Kinsale since the early ’80s, Hopkin addresses the inhabitants and the landscape with an admirable sensitivity, as both an insider and outsider.

In the title story, a photographer takes a trip to Inishere, one of the Aran Islands, and finds herself caught up in a romance with an engineer whom “she decided was anything from ten to twenty years older than her.” Their walks on the island are crosscut with descriptive snapshots of the titular dogs, representatives of an ambiguous sexual force. The couple is taken aback at the sight of “the terrier at the entrance to the Cortina field, stuck immobile to the spaniel. The sheep dog, the groveller and the dachsund were watching patiently, waiting their turn.” It’s the kind of ending where you’re not sure if you should laugh or be appalled.

In the story “Strangers,” another photographer heads to an island off the Cork coast, “interested in taking photos of remote places that had not been affected by tourism.” She describes having “a sensation” she calls “slippage.” The feeling is one “when some part of your being slips into another time, joins the ghosts of another age.” The tug of this threatening otherworldliness, this feeling of slipping through the cracks of time, is dramatically altered once she encounters the “strangers” on the island, the only non-natives living there. She meets Melinda, an odd girl who says she lives with her grandfather. Her only “friends” are naturally formed rock figures that are “about the same size as the life-size statues of the Virgin Mary… their tops covered in weed, like hair.” Melinda introduces them to the narrator and she sees the girl’s “belief” in the statues as “disturbing.” With the revelation of an insidious relationship on the island, the story is cast in a haunting light, giving new meaning to an observation made early in the tale: “In such a place, where light fades dramatically on a far horizon, you can take some remarkable photos.”

Thankfully, Hopkin does not limit herself to one kind of narrative. As her resume suggests, she is a versatile writer. She reimagines an old school Irish ghost story in “Twentyquidsworth.” In others she intimately details the disappointing ebb and flow of love and marriage in small villages. In “Coo,” one of the stories that plays around with form, we get a quietly desperate portrait of an old mariner who washes up on the Cork shores and decides to stay, hiding an illness from those who think they know him.

Predictably, Hopkin is also capable of a strong, journalistic style. Even at their most fantastic, the characters in her stories often possess a keen sense of observation, enhanced by a talent for analysis that turns parts of these texts into mini-essays. This intellectual proclivity complicates these deceptively simple tales.

In “You Can’t Call it That,” the last piece in the collection and its most experimental, the unnamed the narrator says, “I believe the truth is made clearer if one tells lies. Even though you shouldn’t call fiction that. You can’t call it that. I believe in stories.” The narrator then strips away elements of the fictional veneer, offering different versions of the same story. But the truth lies in the art of storytelling itself, a value the narrator needs to believe in as she meditates on the obscure theories and work of the writer B.S. Johnson.

This thinking through and with other writers is a recurring theme in The Dogs of Inishere, most often exercised in stories about the London journalistic set. These yarns stand as a metropolitan counterpoint to the rural settings of the other pieces. People argue about and reflect on writers such as Malcolm Lowry, Charlotte Bronte, Oscar Wilde, and Edgar Allan Poe. A young woman dealing with the pressures of parental expectations in ’60s England makes a crucial bet with her father; she recites Keats’ “Ode to the Nightingale” to him by heart, hoping that he will recognize her determination and allow her to apply to study at Oxford. Hopkin’s theme here (and a powerful undercurrent elsewhere) is that internalizing language and the stories from the past serves as a saving grace, given that life can be disappointing, isolated, but also beautiful.