You are here: Home / Books / Book Review: Nuff Said? — “What Playwrights Talk About When They Talk About Writing”

Jeffrey Sweet has provided a handy oral history of the ways playwriting has changed over three generations.

What Playwrights Talk About When They Talk About Writing by Jeffrey Sweet. Yale University Press, 304 pages, $30. 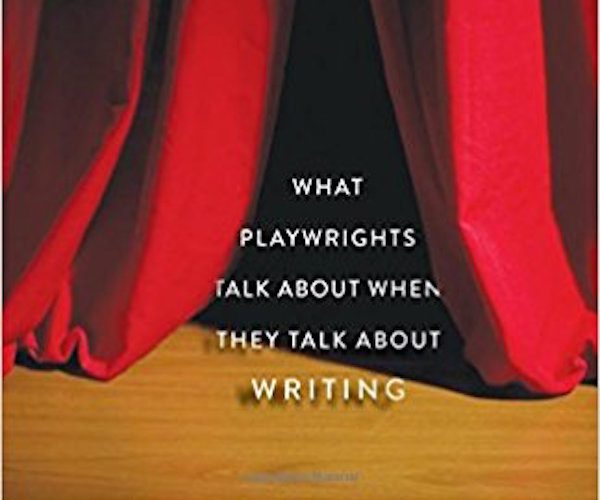 Playwright and theater historian Jeffrey Sweet’s What Playwrights Talk About When They Talk About Writing collects seventeen interviews with English-language playwrights from both the US and UK, along with a profile of the late Edward Albee that originally appeared in Dramatics. With the exception of playwright Lanford Wilson, whose interview is featured as an epilogue, the conversations with the playwrights are arranged chronologically, in the order that each came to prominence.

Sweet embraces the role of interviewer rather than interlocutor. Aside from his obvious admiration for his interviewees, his opinions are kept off the page. This may be what passes for conventional journalistic practice (particularly regarding puff pieces), but when nearly every interviewee has either taught or studied playwriting at Yale, or has served as a judge for the Yale Drama Series’ David Charles Horn Prize, the arrangement advances a propagandistic assumption: that the recent history of American and British playwriting should be seen primarily through the lens of the Yale School of Drama. So it should surprise no one that Yale University Press is the publisher. And it should be even less surprising that YUP did not want Sweet to bring in any of the critical charges he has leveled at the industry in other publications.

The result is a volume that can be read in two very different ways. On the one hand, the conversations are clearly packaged by the publisher to be inspirational, and that is how the book is being marketed — cue the superlative blurbs on the back dust jacket (Ed Asner “loved every word”). For those who want to read that sort of book, they should stop reading this review. This is the tome for them.

However, there’s also another way to appreciate What Playwrights Talk About When They Talk About Writing. Sweet has provided a handy oral history of the ways that playwriting has changed over three generations: the silent generation (“bomb shelter generation” for the British), the baby boomers, and Generation X. Examining the volume for what it says about the evolution of writing for the stage is not particularly inspiring, but truthful nonetheless.

So yes, it is exciting to read how Arthur Kopit’s career was propelled early on when Oh Dad, Poor Dad, Mamma’s Hung You in the Closet And I’m Feeling So Sad was, upon its 1960 premiere at a student run theater at Harvard University, roundly praised as the best play of the year by Boston area critics. But something like that could not happen today because universal admiration has become the default position for most of the theater reviewers in the Boston area. Few are willing (perhaps because they are constrained by editorial fiat?) to give a negative review, so no play could rise to such prominence. Every production generally floats somewhere between an A and an A-.

And Kopit didn’t have (and still doesn’t have) an MFA. Today, it’s hard to imagine that even a renowned political cartoonist for an alternative weekly (such as Jules Feiffer) would be allowed to break into the world of non-profit theater without an MFA in playwriting (the Yale and NYU dramaturgs who run the literary departments at the nation’s regional theaters do not like outsiders treading on their turf). And the commercial theater would not be interested in a theatrical version of a cartoon that doesn’t have a money-generating media property behind it. (While Allison Bechdel did repeat the feat with Fun Home, it was Lisa Kron and Jeanine Tesori who wrote the stage adaptation – only after her graphic memoir had achieved bestseller status.)

One controversial point repeated in many of the interviews is that British writers create “state-of-the-nation” plays and that Americans write “through the lens of the family.” It’s a canard, of course. Robert Schenkkan, the author of All The Way and The Kentucky Cycle, is an exception to that rule included in Sweet’s book. But Sweet is careful not to press the issue with the Americans – it might make things so much less congenial. Today’s MFA playwriting programs do not inevitably carry on the liberal arts traditions of the humanities and social sciences. (It is revealing that the younger the writer in the collection, the less likely it is that he or she sees the dramatist as a public intellectual who engages in social debates.) Meanwhile, American gen-X and millennial dramatists seem to have little connection (or understanding) of the counter-culture that animated older writers who believed that, by bringing sexual edginess and formal experimentation on stage, they were committing revolutionary acts. Many of today’s writers seem to think that a few F-bombs or merely mentioning sex makes a play innovative.

Perhaps the most scintillating exchange in the book takes place in the interview with British dramatist David Hare, who has little patience with nonsense about the social engagement of American theater: “Tony Kushner wrote Angels In America for a theater that did not exist. That theater came into being because he wrote a great play.” Kushner’s absence as an interviewee is notable. And the politically engaged theater that Hare is talking about still doesn’t exist in America. In most urban centers the same mediocre two and three-handers are staged every season, while years go by without a production of a Kushner script. Hare, of course, is privileged to live and work in a country where theater productions are subsidized (American stages, in contrast, are cash poor), so he could write a political drama such as Stuff Happens and expect that resources would be found for a professional production. And this assumption leads to the only real clash in this otherwise chummy collection, when Hare fires back at A.R. Gurney’s objection in The Dramatist, the journal of the Dramatists Guild of America, that an Englishman gets to have his contrarian play produced in American theaters instead of a hypothetical play by an American.

In the margins of Sweet’s oral history you can chart the rise of the demand (academically fueled) that playwrights need ivory tower accreditation. The older writers are (largely) autodidacts who moved into academia relatively late in their careers, accepting faculty positions dedicated to teaching baby boomers how to write for the stage. Feiffer eventually found himself frustrated with his playwriting pupils, irritated that his students were becoming increasingly bourgeoise and careerist. He eventually decided to teach only graphic novel writing. Of the playwriting teachers, only Marsha Norman discusses the craft of narrative structure in a manner that makes one suspect her classes at New York’s Juilliard might be worthwhile. Few dramatists talk about a depressing cultural reality: the new play sector is dominated by the triumvate of MFA programs, large (and commercially minded) regional theaters, and grant giving institutions. Dramatist Lynn Nottage is the only courageous voice in the volume who articulates a reasonable critique:

“They’re not allowing young playwrights time to find their own voices. The minute they come out of these graduate programs they’re given big commissions and then those subsequent plays are produced before the playwrights have a sense of their own identity.”

Anyone who has sat through much-hyped new works, developed via an assembly-line of heavyweight commissions and grants, knows that Nottage’s concerns are well-founded. Indeed, I am reminded of a moment in December 2015 when I was in New York for a staged reading of one of my plays. I was having dinner with friends at a restaurant near the NYU campus, and I overheard a conversation between two graduate students in dramaturgy at the table next to us. One made this statement: “I don’t want to work with a playwright who can’t get a main-stage production by the time they turn twenty-six.” This is the definition of ‘success’ that the Tisch School of the Arts is teaching the next generation – and the creative vitality of American theater is suffering.

So, some readers will value What Playwrights Talk About When They Talk About Writing as a pick-me-up  – especially if they are fans of the interviewees. But its greatest value (critically speaking) may be to suggest difficult questions that are not being asked, and should be. For example, why do theater folk put up with a new play development industry that is so obviously dysfunctional? Why can’t we — playwrights, audiences, artists, critics, and producers — talk about that?

Ian Thal is a playwright, performer, and theater educator specializing in mime, commedia dell’arte, and puppetry, and has been known to act on Boston area stages from time to time, sometimes with Teatro delle Maschere. He has performed his one-man show, Arlecchino Am Ravenous, in numerous venues in Massachusetts and Rhode Island. One of his as-of-yet unproduced full-length plays was picketed by a Hamas supporter during a staged reading. He is looking for a home for his latest play, The Conversos of Venice, which is a thematic deconstruction of Shakespeare’s The Merchant of Venice. Formerly the community editor at The Jewish Advocate, he blogs irregularly at the unimaginatively entitled The Journals of Ian Thal, and writes the “Nothing But Trouble” column for The Clyde Fitch Report