You are here: Home / Books / Book Review: “His Only Son” — A Delightful Discovery from Turn-of-the-Century Spain

A splendid, absorbing read in which you feel as if you’ve been dropped onto the set of a Mozart opera and realize as you keep reading that you are also inside a Chekhov story or play.

His Only Son (with Doña Berta) by Leopoldo Alas. Translated from the Spanish by Margaret Jull Costa. New York Review Book Classics, 344 pages, $17.95. 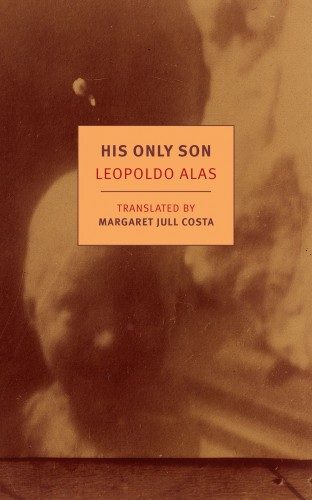 As anyone who has been reading my reviews knows, I firmly believe that chance plays a huge part in whether a work stands the test of time. That’s why we all must be grateful to the publishing arm of The New York Review of Books, which specializes in forgotten books, along with volumes that have not been translated previously into English and many out of print classics. As these books become available, we are constantly expanding our notions of what literature is and how it is made.

We are also able to fill in some gaps. For example, when there was that wonderful surge of South American literature (Borges, Cortazar, Marquez, Fuentes, Allende, among others) in the latter half of the 20th century, highlighted by Gabriel Garcia Marquez’s winning of the Nobel Prize in 1982, those remarkably original storytellers seemed to come out of nowhere. But the truth is that they were part of a long tradition of Spanish literature that we, as English readers, simply didn’t know. Now, though, with the publication of a once justly famous writer like Leopoldo Alas, we can see a little better where they came from.

Alas was born in 1852 in Zamora and died in 1901 in Oviedo, too young to finish the trilogy he began with the publication of His Only Son. He attended university in Oveido and then moved to Madrid for his law degree. It was in Madrid that he took the pen-name “Clarin” and began work as a journalist. He lived and taught in Zaragoza from 1882 to 1883, then returned to Oviedo to teach Roman law and died there.

Known as an exacting critic in his essays and reviews, he is nevertheless best remembered for La Regenta, (The Regent’s Wife) which has been compared to Madame Bovary in its portrayal of provincial life and adultery. His fiction was considered somewhat avant garde at the time because he made use of the interior monologue, a technique used earlier by authors such as Laurence Sterne in Tristram Shandy, but brought into the canon by later writers like Woolf and Joyce and Faulkner and known in English and American literature as “stream of consciousness.”

In 1890 he published what was to be the first volume of a trilogy, His Only Son, but in the remaining ten years of his life left only an outline and fragments of the next two books. Although this last novel was not received as well as La Regenta, it can stand on its own and is a splendid, absorbing read in which you feel as if you’ve been dropped onto the set of a Mozart opera and realize as you keep reading that you are also inside a Chekhov story or play.

This is a story of an unconventional marriage between the spoiled tyrannical only child, Emma Valcárcel and the clerk of her lawyer father, Bonifacio Reyes, “a peaceable, slow, gentle man, tender-hearted and very sentimental, mad about music and fantastical stories and, therefore, an assiduous visitor to the lending library in the village.” They actually marry twice, first when she runs off with him at fifteen only to have — to her astonishment — the marriage annulled and her rebellious self confined to a convent for several years by her outraged father. After her father dies, she regains her freedom, becomes head of the Valcárcel household and marries again, but her husband dies after only a year. Now, though, she is ready once more for Bonifacio, whom her fevered imagination has made larger than life; thus she instructs her fawning cousins (one of whom, Sebastian, has been in love with her for years) to find him.

They finally locate him living a lonely life in Mexico as a newspaper editor. Emma and Bonifacio are married again, but very soon Emma realizes she has made a mistake, now fancies herself in love with her ancestor, a warrior who led a revolt in Spain’s illustrious past, for, as Alas tells us,

Being in love with one of her ancestors, who symbolized for her what she imagined to be a knightly existence, was a passion worthy of a woman who put all her efforts into setting herself apart from other people. This desire to be above the ordinary and everyday, to break all the rules, to defy gossips, to overcome the impossible and to provoke scandals, was not a calculated ambition, the pedantic vanity of a woman led astray by reading fanciful novels; it was a spontaneous perversion of the mind, an unhealthy itch.

Soon thereafter, while Bonifacio slowly becomes resigned to his slave-like position in his wife’s household, the fun begins. A traveling opera group comes to town, he starts to attend rehearsals, and becomes smitten with the soprano Serafina, who mistakenly thinks he will become the company’s patron. Egged on by Mochi, the company’s owner and also her lover and pimp, Serafina initiates Bonifacio into the many mysteries of Italian love-making.

There are hilarious scenes of adulterous love and machinations among the singers and the townsfolk in the very busy Cafe de la Oliva. One passion leads to another; a transformed and ardent Bonifacio is amazed to discover that his ailing wife, whose frailty he administers to every morning, is also capable of ardor so unexpected that he is left breathless. After their crucial encounter Emma decides she doesn’t want to miss out; she gets out of bed, begins to leave the house, and shops endlessly, to the dismay of the pedantic administrator of the dwindling Valcárcel finances. Confusion about sex and money and loyalty abounds, and through it all we have Bonifacio learning more and more about life as it seems to explode with surprises in the once sleepy village that has now become a hot-bed of intrigue.

‘I’m not being unfaithful,’ Bonifacio thought, ‘this is a case of every man for himself.’ His lover’s conscience, the false conscience of a principled romantic, was accusing him, telling him that the vapours from the night’s ‘orgy’ had lit a fire that was not entirely feigned; . . .his surprise at Emma’s unusual attitude was soon succeeded by more surprises that left him virtually speechless, surprises that revealed to him, as if in a dream, how little we know, how deceptive appearances can be, how our fears deceive us, and so on. . . .all of this was imbued with Serafina’s style of love-making …

Although this novel could easily become an amusing farce, it doesn’t. Like Mozart and Chekhov, Alas cares too much for his characters to do that. With the coming of these strangers to their small town, the entire Valcárcel tribe and everyone surrounding them has let go in ways they never dreamed, and as we watch their story unfold and know exactly what they are thinking, we feel that same kind of affection for them that Alas does.

Knowing these characters so intimately gives us a more complicated perspective — thus Alas’s fame for his new way of writing — which makes this seem a far more modern novel than it is. And, when the end comes, we know that although the antics that got us here have sometimes been cruel, the lives of these characters may open out to something more meaningful, something that has a hint of the goodness to which they all, in their own peculiar ways, seem to aspire. So, along with gratitude for His Only Son, comes a kind of wistfulness in which we wonder what Alas was planning for Bonifacio and company, before he died too soon.