The conceit of this disc is both nostalgic and old-fashioned. 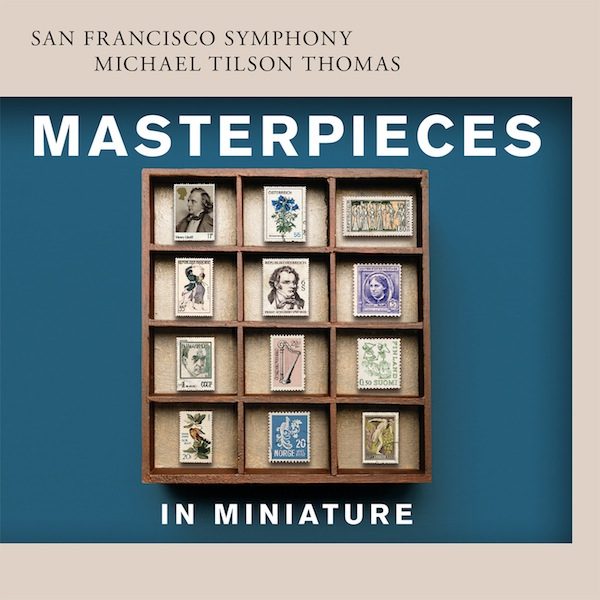 Before Michael Tilson Thomas and the San Francisco Symphony (SFS), you have to go back a ways to find the last pairing of conductor and orchestra that, entering their twentieth year together, was as – or more – exciting than when they started out. Yet such is the case in this happiest of professional marriages and it’s nicely demonstrated on their newest album, Masterpieces in Miniature, on SFS Media.

The conceit of this disc is both nostalgic and old-fashioned. The latter, because, as MTT points out in his liner notes, very few people still play this music: encores largely transcribed from keyboard music. His note refers to working with Jascha Heifetz in the ‘60s and the recitals of Gregor Piatigorsky that often ended pieces like these. And the former since, with its over-emphasis on slow, often quiet, music, it’s hard to escape the sense of looking back and reminiscing together – both collectively and individually (MTT turns seventy next month).

But there’s nothing inherently wrong with any of that and, this being an MTT/SFS collaboration, there are a number of offbeat selections to keep the ear on its toes. Mahler’s Blumine, for instance, once the second movement of his Symphony no. 1 (before it was axed), has, to my knowledge, never been popular in the concert hall, either as an encore or anything else. Yet it turns up here, played with a warmth and lyricism that, if it doesn’t quite overcome its dry four-squared-ness, at least sounds beautiful.

Similarly, Henry Brant’s orchestration of Ives’s mammoth Concord Sonata (called A Concord Symphony), as a piece, doesn’t really work: it robs the original of its novelty, drama, and a good deal of expressive impact. Yet this is precisely the kind of inquisitive approach to exploring and expanding the repertoire that MTT and his band have been taking for two decades now (and, most of the time, it’s paid off well). If, in practice, the piece is flawed, it’s no big deal. The orchestra plays it like it’s by Beethoven and, in fact, there are quite a few snatches of Beethoven in “The Alcotts,” the third movement of Concord, presented here.

Among the best overall selections are Debussy’s La plus que lente with its jangling cimbalom and Grieg’s The Last Spring, a showcase for some deeply expressive playing by the SFS strings. Music by Fauré, Schubert, Rachmaninoff, Dvorak, Sibelius, and Delius lend a nice bit of variety to the proceedings.

Loud and fast music opens and closes the album. The Scherzo from Henry Litolff’s Concerto symphonique no. 4 gets a blistering reading from pianist Yuja Wang, though the shallowness of its musical content gives the impression that it’s most exciting to encounter the piece in concert where you can actually watch the pianist’s fingers fly. My personal favorite is the closing track, the “Cortège de Bacchus” from Léo Delibes’s Sylvia. Drawn from a live performance, it brims with energy, humor, and a respectable, playful majesty.

Most recently, Herbert von Karajan or Eugene Ormandy were, perhaps, dual kings of this type repertoire, at least among conductors of major orchestras. MTT here seems to have picked up the mantle, dusted it off, and claimed it as his own. It’s good and welcome and yet another indication that, with this orchestra and conductor, San Francisco is in the midst of a true Golden Age.