You are here: Home / Books / Book Commentary: Patrick Modiano — An Oddly Elliptical Choice for the Nobel Prize for Literature

Patrick Modiano’s simple sentences pull one in; the nostalgia of loss and pain of youth and the hunt for a vague, romantic Other are easy to relate to.

(Note: In early November, The Arts Fuse will post a review of the latest work of Patrick Modiano in English translation: Suspended Sentences: Three Novellas from Yale University Press.)

No award, with the exception of the Nobel for Peace, excites as much a priori lobbying and speculation, and post-hoc controversy, as the Nobel Prize for Literature. While some decisions, like last year’s honoring of Alice Munro, have been embraced, certain past selections have spurred political fulmination ( e.g., Knut Hamsun, Mo Yan) and others, plain old-fashioned head-scratching. The inscrutable selection committee is famous for its surprises: who would have banked on the acerbic Austrian, Elfriede Jelinek? And there is banking involved, of a sort. According to the Wall Street Journal of October 7th (two days prior to the 2014 announcement) the British betting corporation Ladbrokes was offering odds of 12/1 on Philip Roth, 25/1 on Bob Dylan (a weird perennial favorite) and, sharing the lead around 4/1, Haruki Murakami and Kenyan poet Ngugi Wa Thiong’o. But hey, was there a leak in the famous Stockholm security system? Apparently the name of Patrick Modiano, which had been buried at 100/1, shot up in the final few days to 10/1!

One thing is clear: Nobel readers have a penchant for French writers. In Literature prizes granted since 1901, France leads the inkstained pack with fifteen winners. (The US comes next with 11. Smallish Sweden has eight, understandably: home-team advantage.) The first winner, in 1901, was French poet Sully Prudhomme. Then came the likes of Gide, Mauriac, Sartre, Camus, le Clezio, etc etc… and now–

I was in Massachusetts, half-listening to a French radio station through the Internet, when the proud news interrupted the music, followed by a disarming first reaction clip from the startled winner: ‘C’est bizarre!’ I smiled. My sentiments exactly. At least he’s honest. I haven’t read all of Modiano’s books, the autobiographical novels, stories, and an actual autobiography, and one reason is that, as he himself has said, they all bear considerable resemblance to one another, both in the famous Modiano l’heure bleue atmosphere, in their rudimentary narrative structure, and in their subject matter. Someone is seeking a shadowy remembered figure through the streets of Paris, through certain layers of time: the Occupation, the chaotic Sixties. A man seeks a woman. A child, his father. Or brother. Modiano himself explained in an interview that when he has finished one novel, it seems to reproach him: what that novel wanted to express was not expressed well enough, and so he must commence another, to try to get closer to the essence. He also mentioned that he never re-reads his past work. QED. 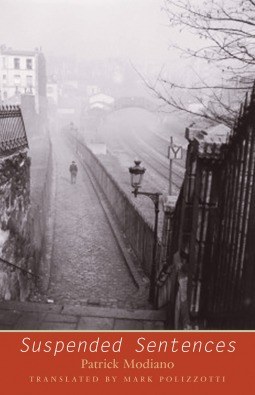 There is something addictive about a Modiano! The simple sentences pull one in; the nostalgia of loss and pain of youth and the hunt for a vague, romantic Other are easy to relate to. And there’s always the hope of salvation through a chance encounter in a café. His novels sell out like hot brioche in France; they make perfect Metro reading. (That’s not a put-down. In the Metro everyone packs a good read.) They distill something quintessentially French: espresso and heartache, idealism and betrayal and Gauloise smoke, self-absorption and the mist rising from the Seine. But will these books travel, as the oenophiles ask about wines? The question seems justified by Alfred Nobel’s stipulation that the prize go to “the person who shall have produced in the field of literature the most outstanding work in an ideal direction.” Enigmatic as that is, surely it implies a high degree of relevance beyond one country’s history and culture. Was Milan Kundera never considered?

Compared to previous years, the committee’s statement regarding the choice of Modiano sounds oddly elliptical: “for the art of memory with which he has evoked the most ungraspable human destinies and uncovered the life-world of the occupation.” Modiano himself commented on this in an interview a few days later, saying, in his halting, cautious and also elliptical way, that his writing is in fact primarily about forgetting, about the omnipresence of forgetting. ‘Memory succeeds in piercing our forgetting–that mass of forgetting. They should have recognized (my work as) ‘the art of forgetting.’ An interesting correction. His oeuvre may or may not be finally judged as slight and repetitive but, given that interesting correction, I’ll be reading Modiano again.