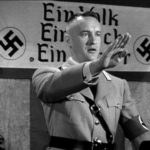 One comes away a trifle numb: in part due to the sheer number of films made; but in part both awed and terrified by Hollywood’s ability to use what were, for the most part, mediocre films to make the ravages of war not only so acceptable to the American public, but glorious.