You are here: Home / Fuse News / Fuse News: The Authentic Weirdness of Walter Sickert and the Army of Broken Toys

Soft Time Traveler by Walter Sickert and the Army of Broken Toys. 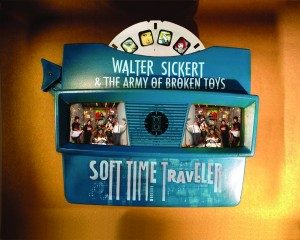 If I worked in a record store, I’d file Walter Sickert and the Army of Broken Toys’ album Soft Time Traveler under “rock,” but I would stick a a giant asterisk on the cover.

The instrumentation—acoustic guitar, ukulele, viola, mandolin, double bass, melodica, accordion—suggests folk, but the songs themselves are rippling with a manic energy and lysergic vision; this is modern psychedelic rock stripped of the jam-band baggage and upending current folk-rock conventions.

The Boston-based septet is known for putting on visually compelling live shows, and it even manages to infuse a theatrical air into its studio recordings. Sometimes that is achieved through the sheer bravado of Sickert’s vocal work, sometimes with atmospheric bits, such as the chatter and crash of “Timeworn Animal.”

There is also a cinematic thread through the record’s 18 tracks. The title track comes last, and by that time, Sickert and his army have rolled out enough carnage and dread that the gas masks, fox holes, and mushroom clouds in “Soft Time Traveler” are practically sighs of resignation, especially because Sickert sings about them in an unworried tone.

The first reference to soft time travel comes in the acid banter of “Hypno-Jump Initiation,” an introduction to the Middle Eastern-accented “Little Paper Song.” If this music is all about tripping, Sickert’s doors of perception open up onto some pretty dark places. He begins by conjuring some exotic voodoo on “Devil’s in the Details.” A country-blues riff is soon sliced with the zip of viola, and then the rhythm arrives in the form of marching feet and clapping hands, which quickly get blown out by frantic drumming. The calm turns stormy in very subtle fashion.

As commanding a presence as Sickert is, the rest of the army—singer and accordionist Edrie, viola player Rachel Jayson, mandolin player Meff, ukulele player jojo Lazar, drummer Tee Jay, and bassists Mike Leggio—is crucial to crafting the album’s collision of world-music, folk, and blues influences. There are no pure strains of music in these songs; instead, there are allusions to everything from cabaret to gypsy jazz all balled together.

Things typically do not go well on Soft Time Traveler. In “Baba Yaga,” a creature devours babies’ bones and souls. In “Soldiers Came,” we hear, “It’s too late/ We’ve been burned at the stake.” Disasters, both man-made and natural, rain down in “28 Seeds.”

A lot of the writing is impressionistic, so Soft Time Traveler lands with a lighter touch than its subject matter would suggest. It’s that ironic contrast between tone and content that makes this such an interesting record.

There are a few flights of pure imagination, such as the A Clockwork Orange love song “Droog and Devotchka” and the gender-bending “Glory Box.”

Soft Time Traveler does not fit easily into any category, but the eclecticism works as a listening experience because the band isn’t forcing any of these startling juxtapositions. This is a case of authentic weirdness.

Walter Sickert and the Army of Broken Toys’ next show in the Boston area is June 1 at Johnny D’s in Somerville. The CD is in stores now as well as available online.