“For an imaginative boy, the first experience of writing is like a tiger’s first taste of blood.”— H. G. Wells, The New Machiavelli, 1911. 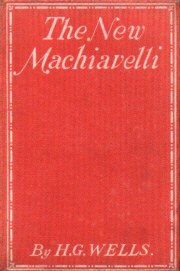 When I saw that there was piece on H. G. Wells in The New Yorker this week I felt that the magazine had picked up on a literary birthday that, after doing a number of searches on Google, had been missed by just about everybody, including the London press. Alas, propelled by what he sees as a mediocre novel about Wells by David Lodge and what sounds like an unnecessary, new biography, Adam Kirsch supplies little more than a boilerplate evaluation of Wells’s life and ideas. Those who want to read a marvelous autobiographical sketch by Wells himself in a transitional novel that combines—uneasily but fascinatingly—the picturesque comedy of Kipps and the myopic utopian vision of Wells’s later novels should turn to The New Machiavelli, which celebrates its 100th anniversary this year. It is in print (a number of editions, including a Penguin Modern Classics)—and somebody should notice its schizo attractions. I guess it is going to be me.

The book represents a contradictory (one step back, one forward) move into the future for Wells the writer. On the one hand, The New Machiavelli rejects Henry James’s call for well-honed form by embracing journalistic pizazz, political realpolitik, and affectionately satiric portraits of middle-class suburbia. The novel’s hodgepodge of progressive opinions include hosannas to the benefits of science (including eugenics) and the superior mind, toasts to feminism, and a disdain for middlebrow art (ironically rejecting the upwardly mobile readership that made Wells’s early scientific romances popular). The plot follows the rise and fall of a brilliant politician, Remington, whose high flying career of battling for enlightenment amid the higher levels of the British government is stopped cold by a sex scandal. The latter was Wells’s way of rationalizing his then shocking affair with Amber Reeves, but today the story of a gargantuan male ego, his desire for power undercut by a sabotaging lust for sexual conquest, recalls Bill Clinton.

The latter part of the book, political maneuverings, elitist rants, and self-justifications for the dalliance, bogs down, though it includes some amusing pot shots at the soft-core Socialism of the Fabians (acid-etched portraits of Sydney and Beatrice Webb), a reform party that Wells tried to crash but left in a huff after he was out-talked and maneuvered by George Bernard Shaw. In the first half of the book, Remington recalls his childhood, and that is where much of the story’s brilliance lies: it says much more about how Wells remains a modern man than Kirsch’s potted conclusion that “the problem he set himself was how to combine that mission, his furious devotion to human progress, with a cool certainty that the end of all progress would be entropy, devolution, nullity. The way he lived that paradox, even more than his books, is what makes Wells, still, an exemplary modern man.” 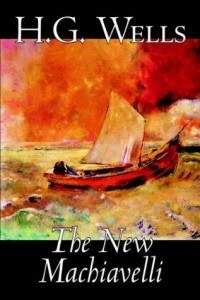 Wells’ ferociously comic sex life looks like his enduring hook to some critics, buoyed by the perception that most of his fiction, once you get beyond the wonder of his scientific romances and Dickensian excursions, is forgettable. I don’t get the impression from Kirsch’s piece he has read much of the post-turn-of-the-century Wells, which is too bad, given that there is some impressive writing (1924’s The Dream, for example) there if you are willing to do some searching. But the fictionalized autobiography of The New Machiavelli contains important clues to how Wells is our contemporary in a peculiarly modernist way.

The terrific opening pages of The New Machiavelli, where Remington details the spell cast by his expansive collection of toy bricks and soldiers, are revelatory: “I dreamt first of states and cities and political things when I was a little boy in knickerbockers . . . my bricks and soldiers were my perpetual drama. I recall an incessant variety of interests. There was the mystery and charm of the complicated buildings one would make, with long passages and steps and windows through which one peeped into their intricacies, and my means of slips of card one could make slanting ways in them, and send marbles rolling from top to base and thence out into the hold of a waiting ship.” Remington creates cities and civilizations, sweeping them away with delight (or searching for inspiration after his mother has cleaned his room) to rebuild anew—it is the artistic imagination, destructive and creative, rooted in the childhood urge to play.

What’s missing in Wells is a strong sense that the creative urge to destroy can be atavistic or, with its sense of endless second chances, inevitably take your eyes off reality. In The New Machiavelli, for example, Remington tries to build the new society without a clue that World War I is on the horizon. Wells plays with visions of the future, sexuality, politics, etc, with a childish exuberance that is liberating yet astonishingly unselfconscious. 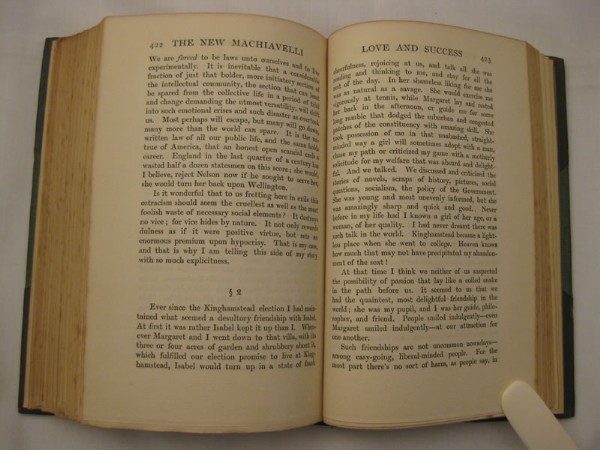 Wells is modern because his imagination is the imp of the perversely innocent, the stuff of reality (including people) made to be molded and remolded in different ways—the paradox of Wells is his erratic mix of the intellectual and the anti-intellectual at the prospect of wiping the slate clean. For example, The Island of Doctor Moreau is not only a parody of evolution but an anti-vivisection fable that is also fascinated by its central artist/scientist figure for whom humanity is but lumps of play dough. The science fiction of The War of the Worlds presents an exhilarating mirror image of how the British empire ravages some of its colonial subjects, a thrilling vision of an omnipotent power (the Martians are tyke-sized brainiacs) that vaporizes civilization’s building blocks.

Contra Kirsch, Wells didn’t try to fuse visions of utopia and entropy in his messy life (how to you prove that broad a contention?). The New Machiavelli represents an admittedly rocky palimpsest of Wells old and new (the first of many in his career) in which the writer attempts to dream a solution to his far-flung contraries without noticing (or caring about) the sadistic aftershocks—that was the adolescent power of his version of modernity, its freshness and its nihilism, which is still alive and kicking and will be found most compellingly in his books, not in his life.