A busy month of theater, especially for postmodern romances, while old-timers such as the Gershwins and Tennessee Williams receive some attention as well. And I am not sure it is theater, but a PBS self-help guru provides uplift for those in the summer doldrums.

Red Hot Patriot: The Kick-Ass Wit of Molly Ivins by Margaret Engel and Allison Engel. Directed by Jenna Ware. Presented by Shakespeare & Company at the Elayne P. Bernstein Theatre, Lenox, MA, August 3 through September 4. Tina Packer stars in this one-woman homage to Molly Ivins, liberal columnist and witty muckraker of conservatives, who proclaimed that she hoped that her “legacy will be helping folks be a pain in the ass to those in power.” The plot suggests the piece revolves around Ivins’s “struggles to make sense of her relationship with her father.” I hope the political satire overwhelms the potential soap opera.

The Music Man, Book, Lyrics, and Music by Meredith Wilson. Directed by Ray Roderick. At the Ogunquit Playhouse, Ogunquit, ME, through August 20. Is there ever been a time there hasn’t been trouble in River City? Iowa is not just a loony primary state. It’s the backdrop for the quintessential musical about the American confidence man. For over half a century now this show has been spoofing Midwestern mores and gullibility, and this rip-roaring revival, starring Peter Scolari, is so fast-paced and energetic that you’ll wonder where the evening went. Appealing and multi-talented actors; fabulous sets, costumes and choreography; and one catchy tune after another. — Helen Epstein

Touch(ed) by Bess Wohl. Directed by Trip Cullman. At the Williamstown Theatre Festival, Nikos Stage, Williamstown, MA, August 3–14. The East Coast Premiere of Wohl’s “lively, bittersweet comedy which explores the scope, limits, and sometimes dangerous side effects of familial love.” Sounds like another (see shows below) off-beat love story, this time a sister (and her boyfriend) attempts to snap her brilliant sibling out of shrink-defying madness.

Love Song by John Kolvenbach. Directed by Risher Reddick. Produced by the Orfeo Group at the Charlestown Working Theater, Charlestown, MA, August 4–27. The Boston premiere of the 2007 play — nominated for an Olivier Award — which is a homage to “the possibilities of love.” The plot: “Beane is alone, an exile from life. His sister Joan and brother-in-law Harry try to reach him but keep coming up short. Following a burglary at Beane’s apartment, Joan is baffled to find her brother blissfully happy and tries to unravel the mystery behind his new love, Molly.”

This production, the play above, and the next production on my list suggest a hunger for edgy romances this summer—love stories well off, I hope, the sitcom path. Kolvenbach is the author of on an average day, Gizmo Love, The Gravity of Means, and Fabuloso. His plays have received productions at the Comedy Theatre in London’s West End, Steppenwolf Theatre Company, MCC Theater in New York, Wellfleet Harbor Actors Theater, and Merrimack Repertory Theatre.

The Betrothed by Dipika Guha. Directed by Jesse Jou. Presented by the Wellfleet Harbor Actors Theater at the Harbor Stage, Wellfleet, MA, August 4 through September 3. South Asian playwright Guha has penned what sounds like an intriguingly spooky romance set in “a world where murder, ghostly possession, and rampant cuckoldry are everyday realities and ‘meeting your match’ takes on an entirely different meaning.”

Bakersfield Mist by Stephen Sachs. Directed by Jeff Zinn. A National New Play Network Rolling World Premiere co-produced by Wellfleet Harbor Actors Theater and New Repertory Theatre at the Julie Harris Theatre, Wellfleet, MA, August 11 through September 4. New England premiere of a play based on the amusing documentary Who the #$&% is Jackson Pollock?. The plot follows: “Maude Gutman, an unemployed chain-smoking bartender living in a trailer park, has bought the ugliest thrift store painting she could get her hands on as a gag gift. After the painting is rejected, Maude tries to offload it at a yard sale where she learns it might be much more than junk—it just might be the ‘find of the century,’ an undiscovered Jackson Pollock painting.” The cast includes Ken Cheeseman and Paula Langton. 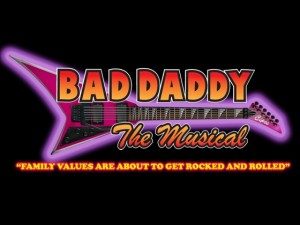 Bad Daddy: The Musical. Book, Music, and Lyrics by Rick Cipes. Choreographed by Melody Waluk. Presented by WTF Company at Oberon, Cambridge, MA, August 16–25. Veteran West Coast entertainment journalist Cipes pens his first stage production, and it’s “the Millennials vs. the Boomers in a dark comedy about communication breakdown in the 21st Century, and it’s all set to a catchy adult-alternative rock score.”

Period of Adjustment by Tennessee Williams. Directed by David Auburn. Presented by the Berkshire Theatre Festival at the Fitzpatrick Main Stage, Stockbridge, MA, August 16 through September 3. Until the expansive festivities at the Provincetown Tennessee Williams Theater Festival slated for late September, here is a chance to celebrate the 100th anniversary of one of America’s finest playwrights. A rare production of a “serious” comedy by Williams, a tale of marriages young and old in danger of breaking apart. The original Broadway production of the play opened at the Helen Hayes Theater in New York on November 10, 1960 and ran for 132 performances. The so-so 1962 film version stars Jane Fonda and Anthony Franciosa.

The Gershwins’ Porgy and Bess by George Gershwin, DuBose and Dorothy Heyward, and Ira Gershwin. Adapted by Suzan-Lori Parks and Diedre Murray. Directed by Diane Paulus. Choreography by Ronald K. Brown. Produced by the American Repertory Theater (ART) at the Loeb Drama Center, Cambridge, MA, August 17 through October 2. ART honcho Paulus is continually stalking Broadway, and this time she has lined up a classic show and brought in an impressive team (Parks and Murray) to re-vamp the at times awkward book, as well as a big name cast that includes Norm Lewis, Audra McDonald, and David Alan Grier to play Porgy, Bess, and Sportin’ Life respectively.

Lighten Up!, written and performed by Loretta LaRoche. Presented by the Stoneham Theatre, Stoneham, MA, August 18–21. As I write this, the United States may be headed for the cliff, economically speaking. So what could be a better pick-me-up than an evening with PBS guru and “LLuminari” LaRoche, “dispensing cutting-edge information which audiences of any age will want to incorporate into their daily lives. With her contemporary wit and a hearty dose of old world wisdom, Loretta brings a breath of fresh air for everyone who is suffocating in our techno-crazed, germ-phobic, go-go-go world.” Slow down, eat healthy, and stop to smell the bankruptcy.

Hopper’s Ghosts by Kevin Rice. Directed by Allen Kennedy. Staged at the Payomet Performing Arts Center, Turo, MA, August 18–27. A revival of a play that “creates a compelling portrait of what went on between the moody, self-absorbed painter [Edward Hopper], and the woman [Jo Nivison]—herself a successful painter, belittled by her chauvinist husband—who doted on him for over 43 years of a turbulent marriage that ended with his death in 1967.”