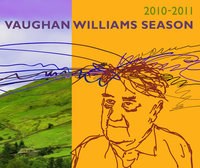 The Cantata Singers, a choral group highly esteemed for their programming and superior music making, has devoted the past few years to examining the choral music of one composer per season. The three previous composers to receive this lavish attention were Kurt Weill, Benjamin Britten, and Heinrich Schütz. This is their 47th season and their 28th under their excellent Music Director David Hoose and may be among its most exciting.

This year’s focus is on Ralph (he pronounced it “Rafe”) Vaughan Williams (1872–1958). A varied tasting platter of his charming vocal music from his long career was presented October 3 at Longy School of Music in Cambridge, MA. The songs, beginning with “Linden Lee” (1901) took the listener to the end of Vaughan Williams’s long life with a simple song “Tired” from Four Last Songs (1954–58). Nine singers and their excellent pianist, Allison Voth, took on a wide selection of all kinds of solo and ensemble music to give the listener, as Ms. Voth put it, “a sense of the depth, breadth, and beauty of his vocal composition.”

Williams had a beguiling way of setting a song simply for a singer with one instrument—a viola, “Who is this fair one?” from Four Hymns (1914) with violin and two songs from Along the Field (1927). “A Poison Tree and “The Piper” from Ten Blake Songs (1957), set for voice and oboe, received a terrific performance by Jason Sabol and oboist Barbara La Fitte. Mr. Sobol is the kind of singer who makes singing seem to be  a natural extension of speaking. Every word was clear and unforced, matched musically in spirit by Ms. La Fitte. Lisa Lynch sang two “Along the Field” songs (with violin) with a voice I associate with British folk songs, light but always ready to deliver the bad news, which helps when singing poems by Alfred Edward Housman.

The next concerts in the series will be Friday, November 5, at 8 p.m. and Saturday, November 6, at 8 p.m. The program will include Vaughan Williams’s Flos Campi with viola and his Concerto in A minor for Oboe and Strings (featuring the superb oboist Peggy Pearson).

Williams had a knack for choosing apt poetry. Robert Louis Stevenson provided the perfect poems for my favorite of Vaughan Williams’s song cycles, Songs of Travel (1904). David Kravitz, who sang these in recital last year, delivered two of these simply perfectly, with a beautiful deep baritone and just the right amount of drama and pathos. I only wish he could have sung the whole cycle.

George Herbert provided the poetry for five of the vocal selections, including Five Mystical Songs, with baritone Brian Church sang with beautiful enunciation and emotional coloring. “I got me Flowers” and “Love bade me Welcome” began as baritone solos, but toward the end of each a small chorus would hum or sing along. The whole concert was, in a word, charming. It made you want to explore more of this composer, which was exactly its intent.

What was as impressive as the charm of the songs was the spectacular 116-page program book, a gold mine of information that will also serve for the four big concerts coming up. It features many of Vaughan Williams’s writings, photos, a four-page time line of world and cultural events that occurred during his life (his birth 1872 coincided with The Great Boston Fire and the opening of the Brooklyn Bridge), a photograph of manuscripts, and assorted writings, most quite interesting. One of the most profound was this, which opens the program book:

One thing we can be certain of: we do not compose, sing, or lay music for any useful purpose. It is no so with the other arts: Milton had to use the medium of words whether he was writing Paradise Lost or making out his laundry list; Velasquez had to use paint both for his “Venus” and to cover up marks on his front door. But music is just music, and that is, to my mind, its great glory. How then do I justify music? There is no need to justify it, it is its own justification: that is all I know and all I need to know.