Editor’s Note: My 2015 interview with American lit scholar and critic Morris Dickstein, who died on March 24, 2021. He wrote one of the few interesting books on the arts critic as public intellectual: 1968’s Double Agent: The Critic & Society.

“Arts journalism should meet the same high standard as other forms of writing but rarely does, even in the good old days.” 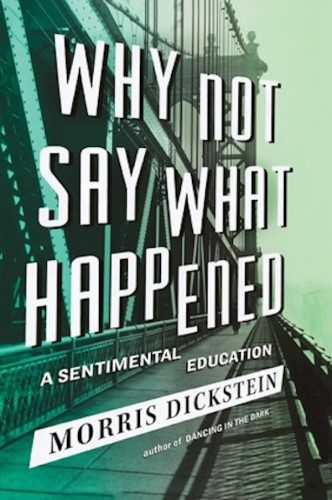 In his Arts Fuse review of Morris Dickstein’s memoir Why Not Say What Happened: A Sentimental Education, Gerald Peary points out that the life of this distinguished film and literary critic, a renowned university professor and author, has been an American success story: “For those of us who value a formal education when done right, the volume is a glorious celebration of a life lived to the hilt in the classroom.” Just about all the reviews of Dickstein’s volume have noted how well he conveys an infectious “zest for the life of the mind,” his celebration of art and ideas dramatized through experiences with a series of model university educators who encouraged a wide-ranging and vigorous intellectual engagement with the world of culture.

Of course, the trick is to move a ravenous hunger for literature and the arts out of the classroom and into the broader community. Dickstein grapples with this all-important issue in his 1992 book Double Agent: The Critic & Society: “How can a strong sense of literature itself be reconciled with an equally strong sense of the place of literature in the course of history and the lives of men and women.” Is a meaningful criticism still possible? Or has “the professionalism of criticism turned it simply into an academic ‘field’ where the criticism of criticism now has its own comfortable niche?”

Who better to ask some admittedly general questions (via email) about the state of the culture, reports of the decline of arts journalism, and the health of literary studies? Dickstein’s replies are below.

Arts Fuse: What was Partisan Review like in its glory years? How did you respond to the rightward move of writers such as Diana Trilling and Norman Podhoretz? Attack? Ignore?

Morris Dickstein: I wasn’t around in its real glory years but I can tell you what they were like. PR was a “little” magazine, a quarterly whose circulation rarely broke into the five figures, but for a few decades it became a byword for intellectuality, a vehicle for vanguard work in politics and the arts. Both the modernist current in the arts and the radical turn in 20th-century politics helped foster a stratified culture that separated a small, influential, and in some ways prophetic minority from the larger audience. PR was one of the settings where the dramas of both modernism and Marxism were played out. Since some of the sharpest, most creative minds got fired up by these movements, they filled virtually every issue of the magazine with astonishingly good work.

I wouldn’t link Diana Trilling with Norman Podhoretz since they evolved in opposite directions. He turned steadily right staring in the late ’60s, ending up as a Reaganite and a neoconservative, though still with the polemical passion and intellectual range of the old PR days. She had been a “hard” anti-Communist in the ’50s and a stern critic of the Columbia student uprising in the late ’60s but remained a liberal and something of a feminist. I knew her in her last years, when she repeatedly compared neoconservatism to Stalinism for casting every issue along a predictable ideological grid, a straitjacket, really. The differences between them, besides being personal, reflected the split that the ’60s opened up among the New York intellectuals. Some, like Podhoretz, Saul Bellow, Hilton Kramer, and Irving Kristol, recoiled and turned furiously conservative, always looking for ways to smash the left, while others — I’m thinking of Philip Rahv, Dwight Macdonald, and Alfred Kazin, for example — found their old radical sympathies rekindled. PR under William Phillips went in both directions, first turning mildly radical — that’s when I was asked to join the board — then, in the ’80s and ’90s, turning mildly conservative. This may simply have reflected Phillips’s temporizing personality.

AF: Are the New York intellectuals defunct? Is there anyone carrying on that tradition today?

Dickstein: I’m no declinist: there are plenty of younger critics and intellectuals who carry on similar work, and some of them even build on the work of the older intellectuals. But they had a different formation, forged not in early modernism or Depression radicalism but in the ’60s, or in the Reagan era and the Clinton ’90s. The politics were different, the popular culture, especially the role of movies and music, was different, their very education and social beginnings were different. And so was the technology available to them, beginning with computers and the Internet. This helped create a much more dispersed and fragmented culture — not just in New York, not even in the universities, but everywhere and nowhere at the same time. But their ambition to write about politics and the arts intelligently (and free of academic jargon) remained much the same. On the model of the earlier New York intellectuals, they continued to address a sophisticated general audience on broadly important subjects. Only the venues were different, sometimes online, at other times in broad circulation print outlets like the New Yorker, the Nation, the TLS, Bookforum, or the old New Republic. Don’t forget surviving little magazines like Dissent and the Threepenny Review or newer ones like n+1, which often vet young talent for more widely read journals.

AF: Is there an equivalent today to the kind of education you received at Columbia University? If not, what might be behind its demise? Technology? The university as corporation? The enduring anarchy of the ’60s? Multiculturalism?

Dickstein: I’m sure there are plenty of schools where you can still get a good liberal education, especially in small liberal arts colleges but also in the bosom of a large university. Columbia remains one of them, though the college itself is larger now. It still has its core curriculum, focused on the whole Western tradition and taught in small discussion sections, not large lecture classes.

Unfortunately, most of these sections are now taught by overburdened graduate students, with few senior professors joining in. It’s also unfortunate that the economy helps keep students from concentrating on the liberal arts. The numbers for English and history majors have been in steep decline. No doubt this can be attributed in part to changes in the fields themselves. It’s no secret that the study of literature has grown steadily less humanistic and more politicized and aridly theoretical. No one can say a kid can’t get a good education today but it’s also damned expensive. If young people have to mortgage their future, that’s a real incentive to go for the money, not for what they otherwise love.

AF: What do you see as your mission today as a professor? Carrying on the Columbia tradition, a search for transcendence in literature?

Dickstein: I’ve rarely plumped for transcendence in literature. It’s not really a good substitute for religion, though it provides some secular versions of religious questions and ultimate values. Instead of reaching for transcendence, literature helps us understand human life in different times and places, including our own. Cultural works are forms of investigation and self-understanding, parallel to — but different from — the kind of insight we get from religion and from science. I see every work of art, besides being a piece of imaginative craft, as fundamentally a human story. This is just as true of nonrepresentational art, also a product of human making and feeling.

AF: What do you think about the condition of serious journalistic criticism of the arts, which you wrote about in your book Double Agent: The Critic and Society? Should we care that criticism is disappearing in newspapers and magazines? Dickstein: Cultural journalism has not exactly collapsed but it’s gone through a sea change. The disappearance of book review sections is part of the crisis of publishing. Just as book culture has shifted towards electronic publishing, online journals like Slate, Salon, the LA Review of Books, and Tablet have taken up some of the slack in arts reviewing. These are unusual on the Internet, though, because they’re edited like print publications. Most of what you find on the Net is completely unfiltered, a way of sounding off. Arts journalism should meet the same high standard as other forms of writing but rarely does, even in the good old days. Even then, most book reviews in newspapers were little more than plot summaries and patches of free publicity.

AF: In his new book Notes on the Death of Culture, Mario Vargas Llosa argues that spectacle has now triumphed over ideas and words. This new global culture depends on “mass industrial production and commercial success. The difference between price and value has disappeared; they are now the same thing, where price has cancelled out value.” He concludes that “culture is entertainment and what is not entertaining is not culture.” Any apocalyptic forebodings about the future of literature? If not, why are you optimistic?

Dickstein: The lines between culture and commerce have eroded, at times disappeared. There’s more coverage of movie deals and box-office grosses, to say nothing of the foibles of the stars, than of the movies themselves. I recall a long-ago conversation with one of the editors of the Times Book Review, who complained that it was hard to convince their journalistic overlords, who wanted more straight news about books, that the real news was what was in the books, not in their commercial ambience.

Now the Book Review is a lone survivor among free-standing book sections, though it also runs multiple, often redundant bestseller lists. Unfortunately, publishers have not stepped up to support it with much advertising. University presses do advertise serious books in the NY Review of Books and Bookforum, because of their readership and because they pay unusual attention to the work they publish. These are exceptions to the rampant commercialization of the arts. On the other hand, the more commerce and vacuous celebrity dominate the center, the more creative activity ignites at the fringes. We need a new minority culture similar to the one that developed in the early modernist years, challenging, discomforting, but not always as hostile to the audience as the old avant garde often was. I’ve never felt that culture and entertainment were mutually exclusive. After all, they converged nicely in the 19th century — in the novel, in art, in music, thanks, I suppose, to the despised bourgeoisie. I’m not sure this can’t happen again.

Bill Marx is the Editor-in-Chief of the Arts Fuse. For over three decades, he has written about arts and culture for print, broadcast, and online. He has regularly reviewed theater for National Public Radio Station WBUR and the Boston Globe. He created and edited WBUR Online Arts, a cultural webzine that in 2004 won an Online Journalism Award for Specialty Journalism. In 2007 he created the Arts Fuse, an online magazine dedicated to covering arts and culture in Boston and throughout New England.