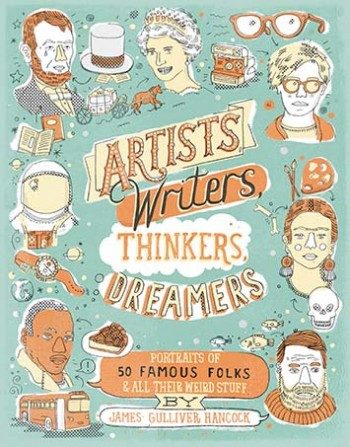 James Gulliver Hancock‘s Artists, Writers, Thinkers, Dreamers: Portraits of 50 Famous Folks & All Their Weird Stuff is a weird cartoon bait-and-switch. In his introduction, the Brooklyn-based illustrator says that he was always interested in the way people hang onto things that are “extensions of us, props that we gather to help project an identity and help us interact with the world. We can learn a lot about a person from looking at what they [sic] choose to surround themselves with.”

This paperback volume is not that book.

Instead, Artists, Writers, Thinkers, Dreamers is a series of single-page biographies drawn in black ink and two color washes per famous figure. The drawing style is free-form: most of the huzzahed have triangular, three-flanged noses, and the images are laid out like pages of a naturalist’s specimens without regard to scale.

Abraham Lincoln in grey and amber (would that Hancock had gone with grey and blue!) has the president’s top hat (“wore this”), a lady with an off-the-shoulder dress (“awkward with these”) and a satisfied-looking turkey (“saved this”) along with obvious and not-so-obvious milestones (including “shot here”). The entry for #50, The Wright Brothers, in taupe and chartreuse, shows the Spruce Goose and also a Sitka spruce tree (sans Christmas ornaments), the mandolin the brothers took camping, and the hockey stick that knocked out Wilbur’s teeth. Only one of these is a prop that they were likely to have kept around the house.

Look carefully and you can see unexpected correlations: lots of these famous folk wore glasses! And rode bicycles! Smoked cigars! Petted animals! More than a few abused drugs and a couple won the Nobel Prize. And the contrasts! Margaret Thatcher cooked dinner while PM (the covered casserole seethes with Tory pen-strokes) but Madonna, mother of four, is a vegetarian who can’t cook.

Hancock is a friendly biographer, but not a particularly reliable one. Coming originally from Australia, he may have missed out on a few details. I doubt any American would have gotten the name of Oprah Winfrey’s beau wrong (even I know it’s Stedman Graham, not Graham Stedman). Freud’s wife was Martha Bernays, not Martha Bern. Yoko Ono, married to John Lennon on page 59, buys a hair of Salvador Dali’s moustache on page 95. But it turns out that Dali duped her and sold her a blade of dried grass for ten grand instead, lest she use his personal effect to cast a spell. This is something that I never, ever could have expected I would have to fact check.

In the book’s finale, Hancock introduces himself. He has a quiff, wears glasses and bowties and eats a lot of muesli.