There are many who claim that the Berlin Philharmonic is the greatest symphony orchestra in the world. Whether true or not, this formidable institution visited Boston’s Symphony Hall this week, led by Sir Simon Rattle (b. 1955). From 1980 to 1998 Rattle raised the City of Birmingham Symphony Orchestra to the top rank, and since 2002 he has headed the Berlin body. Unlike many conductors, he distributes his players on a series of four risers, an arrangement much to my liking. 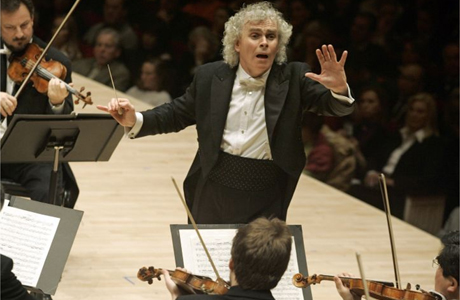 The work was the first of three valedictory pieces, all written (1908-10) under the diagnosis of fatal heart disease. It was followed by Symphony No. 9 and an unfinished Symphony No. 10. It is often stated that the latter survived only in fragmentary sketches. But two of its five movements were fully scored, and every bar of the rest was accounted for and bore substantial indications of the instrumentation. A half dozen people have made complete performing versions, the best being that by Deryck Cooke – which Sir Simon and his Berliners played in New York last week and have recorded on a CD.

For Das Lied Mahler chose seven poems from Hans Bethge’s 1907 German anthology of ancient Chinese poetry. And musically Mahler emphasized the notes of the Chinese pentatonic scale: C-D-E-G-A. He used a large orchestra, but scored the music with great restraint and subtlety (the unusual fluttertonguing for three flutes in the opening number came through nicely). The principal oboist and flutist had many exposed solos, beautifully executed, and Sir Simon rightly had them take individual bows at the end.

Mahler designed the work’s six movements to be performed by a tenor alternating with a contralto. But the composer authorized the use of a baritone instead of an alto, and that was what we got this time. Tenor Ben Heppner (b. 1956) displayed a forceful voice in the first, third and fifth songs. He sang from memory, though he held a book of the texts in his right hand but did not have to consult it.

Das Lied works best with a woman singing the second, fourth and last movements, and that is the solution generally adopted. Here these numbers were entrusted to baritone Thomas Quasthoff (b. 1959). Much of his singing was admirable, though the marvelous E-flat outburst near the end of No. 2 (“Sun of love, wilt thou never again shine?”) really benefits from a female voice soaring above the briefly assertive orchestra. The sixth song, “Farewell,” using two poems separated by a long orchestral interlude, lasts a half hour and is thus as long as the other five songs combined. The playing was superb. At the very end, the music dies out with delicate sounds from a celesta, harps, and mandolin. Mahler added a few words of his own, finishing with a nine-fold descending “ewig” (“forever”). Here one saw Quasthoff’s mouth moving, but at least from my first-balcony seat near the stage the concluding sounds were not audible.

Mahler never heard this masterpiece. It received its premiere (November of 1911) a half year after his death, conducted by his friend Bruno Walter. Walter made a pioneering recording in 1936, with tenor Charles Kullman and alto Kerstin Thorborg (whose performance has not been surpassed, and has been reissued on CD). Walter made two fine later recordings (one with the gorgeous Kathleen Ferrier and Julius Patzak); and, among more than a hundred others, there are excellent versions by Otto Klemperer (with Christa Ludwig and Fritz Wunderlich) and Fritz Reiner (with Maureen Forrester and Richard Lewis).

Sir Simon opened his Boston concert with Stele, by Rumanian-born Hungarian composer Gyorgy Kurtag (b. 1926). A stele is a memorial pillar, and this 13-minute piece has three unbroken lamentations, scored for an enormous orchestra including four Wagner tubas and a huge percussion section. This 1993 score was the first work Kurtag had written for full orchestra in four decades, and was commissioned by the Berliners. It begins with a unison and ends with a simple triad, but builds up to crushing dissonances in the middle. There is one miscalculation, a passage where the winds and brass totally overpower the strings. But there is no denying the work’s overall effectiveness.