Like the Dance Exchange’s staged and site-specific productions, Liz Lerman’s Hiking the Horizontal is pieced like a quilt. Like Liz, it’s a little rumpled and gives the reader a lot of permission to go her own way. 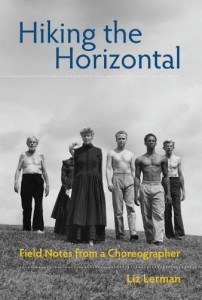 The morning in 2002 that Liz Lerman won her MacArthur “genius” grant, I ran into a senior dance world colleague who, I knew, shares Lerman’s progressive political commitments. As I enthused about the recognition, the colleague sneered, saying dismissively, “she’s not really a choreographer.” I was aghast and managed to sputter “she didn’t get it for choreography. She won for community organizing.”

Over the past three decades, Lerman has tried to bridge those two domains and gone further, articulating a case for why this junction is an important realm to explore. Her work throws into stark relief some of the assumptions many of us have about the arts, both high and low. She has codified this in four pithy questions:
Who gets to dance?
Where is the dance happening?
What is it about?
Why does it matter?

Adding, “Ask a difficult enough question, and you will need more than one discipline to answer it.”

Hiking the Horizontal is, alongside the practical toolbox of exercises and techniques posted on the Liz Lerman Dance Exchange’s website, a demonstration of the complexity with which she and the community of dancers, administrators, sponsors, and community activists around the Maryland-based company have addressed those questions. The title is itself a revelation, a visual and kinetic metaphor that has within it a gentle, if unmistakable, critique of hierarchy. At one end of the hierarchy is “art so separate from the rest of culture that its greatness is measured by its uselessness.” At the other pole–top, down, at whichever end your cultural philosophy favors–is “art so embedded in its culture that no one thinks to call it art . . . sacred rituals, healing ceremonies, objects made beautiful by their functions, people meeting and moving through the stories and needs of the calendar of festivals.”

But take that polarity and lay it on its side, and it becomes the map of a spectrum that dissolves binary categories and in its place creates new room for art-making that incorporates “tolerance, generosity [and] nimbleness.” It also creates an arena in which Lerman can pose her proudly rhetorical “why would I want to live in a world where I would have to choose between concert and community, between nurture and rigor, between abstraction and representation?”

Like the Dance Exchange’s staged and site-specific productions, Hiking the Horizontal is pieced like a quilt. Like Liz, it’s a little rumpled and gives the reader a lot of permission to go her own way. Telling biographical anecdotes pop up in the midst of other discussions: the father who believed in social justice and the mother who believed in art; the early dance teacher who mixed up the genres. Lerman recalls her brief stint as a go-go dancer and her challenges as a traveling, working mom. There’s a lot about Lerman’s formative work teaching dance to elders in nursing homes and the way she learned that diminished physical capacity could generate rich theme-and-variation and new definitions of beautiful expression. (Teaching Dance to Senior Adults, the handbook she wrote in 1983 about that work, is still in use by arts therapists.)

She touches on her Jewish upbringing and the way her rebellious spirit eventually grounded her work on the Hallelujah Project, which challenged members of 15 American communities to explore questions of faith and celebration and describes what she sees as the commonalities between two documents that have shaped her identity, the Talmud and the Constitution. She likes, she says, to “rattle around in other people’s universes.”

Lerman is better at describing the background of her pieces–the process, the conversations, the logistical challenges–than what the finished work looked like. But every once in a while she admits to an influence that explains a lot: yes, many of the early, diffusely overlapping Dance Exchange pieces look like they could have been directed by Robert Altman. The style of Dance Exchange’s stage work is reflected on the page. References loop together in a way that seems unplanned while big insights come dressed in offhand references. (Essays written for various occasions and reprinted here probably account for some of the repetition and overlap.) The book’s casual, nonlinear narrative will drive some readers crazy even as it invites others in.

Now about the criticism–from within and outside the dance field–about whether Liz Lerman is a choreographer. Granted, she’s no Mark Morris or Bebe Miller. When you’re incorporating performers over age 60, shipyard workers, and little kids, you’re not going to be pushing the limits of athleticism. “One of the challenges of participatory art-making is that you frequently have to teach people the skills they need to make the dance while they are doing the dance,” she writes. If the goal of her community work is the way its participants will feel and the conversations the storytelling and thematic juxtapositions engender, formal choreographic criteria take a back seat. The merit of that work is not primarily proven in its final, staged presentation. The value is in the doing.

When Lerman’s stage work is created with her professional troupe, which pioneered the combination of youthful dancers and those well into their senior years, the results are less impressive and arguably less important. Like Bill T. Jones, the Dance Exchange’s work takes on big, politically-charged topics. But it’s the topics, and not formal values, that give her company’s work its choreographic juice. Given that Hiking the Horizontal is a book and not a video retrospective, a reader unfamiliar with the Dance Exchange will have a hard time telling why. That is why Lerman’s defensiveness is disconcerting, even when exasperated, as she finally spells out her complaint that “accessibility is not the same thing as dumbing down.”

But as far as I’m concerned, Liz Lerman shouldn’t be any more defensive than a gifted community muralist should be defensive that she’s not a famous plein air painter. If the art world was indeed more horizontal, there wouldn’t be any need for this important and generative public intellectual to feel that she was required to be anything other than what she is.