You are here: Home / Books / Arts Commentary: A Call to (Proper) Arms — Why a Science Fiction/Fantasy Fight Over Sexism Matters

As a writer of genre fiction, specifically mysteries, I tend to get involved in my own little world’s battles. But when I heard from friends who write fantasy novels about a brouhaha brewing in their world, it took me back. I used to read LeGuin, Asimov, and Bradbury, and what I was hearing now shocked me—and disturbed me because I realized that what I once loved about those books, their speculative future-focused optimism, mattered to those beyond the genre, too.

Call it dueling futures. Because the battle for the soul of the science fiction and fantasy community is about nothing less, and even if we in the mystery community never considered the impact of a chainmail bikini, you may want to sharpen your broadsword.

The fight began at a trade publication, but its implications reach far beyond. Specifically, the brouhaha came to a head last month with the publication of issue #202 of the quarterly bulletin of the SFWA, a professional organization for science fiction and fantasy writers that claims 1,800 members. But the ill will in the SF/F community, as it usually abbreviates itself, had been brewing far longer. Last winter, for example, numerous bloggers complained about issue #200, which featured on the cover a male fantasy figure (female warrior with large breasts, barely concealed in the dated—and clearly ineffective—chainmail two-piece mentioned above). More to the point, the issue contained a history by longtime contributors Mike Resnick and Barry N. Malzberg of women in the genre, which referred to “lady editors” and “lady publishers,” occasionally citing their “knockout” looks. The next issue, #201, had a piece by a different male writer, CJ Henderson, praising Barbie—yes, the doll—for maintaining her “quiet dignity the way a woman should” (not to mention that she has “quite the pair of sweater-fillers”). Then, in June, issue #202 came out with another adolescent fantasy cover, a well-intentioned discussion of objectification—and Resnick and Malzberg’s rebuttal to the “liberal fascists,” “thought police,” etc., who didn’t like their previous column. All hell broke loose. Did I mention that this is a professional bulletin?

This squabble follows hard on the heels of closely related explosion of bad boy behavior. SF/F conventions, or “Cons,” are where authors and readers meet and literary prizes are awarded. Because of the highly interactive nature of SF/F, there’s also a huge overlap with gamers, online forums, films, etc., and big deals—real money—are made. It’s become an open secret that many cons are unsafe for women, with groping, stalkers, and inappropriate behavior as rife as, well, those damned bikinis.

Increasingly, women in the genre—dues-paying, book-writing, comics-illustrating humans—are speaking out. But when they do, they have been viciously attacked with language that would appall the Texas legislature. “If the bitches don’t like it they can leave,” reads one comment on the blog Gorgonmilk, referring to the SFWA fight. “We Y-chromosome boys were in this hobby before it became cool and the vaginas started joining.” And that’s some of the more printable language. Rape and death threats are not uncommon.

Nor is the hatred aimed simply at women. There’s the open homophobia of SF author Orson Scott Card, for example, which has resulted in a call for a boycott of the upcoming film of his book Ender’s Game. For women of color—hell, for SF/F professionals of any gender of color—the issues multiply.

But the tide may be turning: Author Genevieve Valentine blogged about being harassed last summer at ReaderCon, a Massachusetts-based con, which she attended as a nominee for the prestigious Shirley Jackson award. After much back and forth, the offender was banned for life and the entire board resigned. In May, author Elise Matthesen formally reported an editor—an editor—for sexual harassment at WisCon, in Madison, and as of July 7, he is no longer with his publishing house.

Meanwhile, the (female) editor of the SFWA bulletin, Jean Rabe, has resigned, and the publication is on hiatus while the board reviews its policies. And though recent SFWA president John Scalzi, whose three-year term ended July 1, has declared a policy of not speaking about the controversy for at least one year, he did apologize to the membership. He has also, and more importantly, spearheaded a campaign to boycott any conventions that do not have a stated anti-harassment policy. 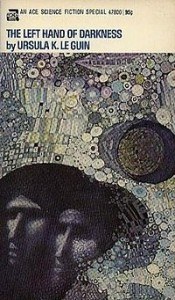 But it is exhausting to have to continually re-fight this battle. In a professional arena, we want to be treated professionally. That means nobody has the right to comment on our looks, our sexuality, or our apparent level or lack of sexual activity. (And, believe me, if the tables were turned, so many of these trolls would understand: fat, balding, and effectively impotent as so many may be.)

And this isn’t simply a tempest in a teapot, not even a futuristic one. Because while in the public imagination, SF/F may summon images of socially inept males, the field has always been more than nerd boys tugging one off to rocket-fueled fantasies. Despite the bikinis, SF/F has also always been the home of progressive thought. Back in 1969, Ursula K. LeGuin wrote of gender-fluid characters in a bisexual world in her brilliant The Left Hand of Darkness, which won virtually all the genre’s top awards. Since then, writers like Octavia Butler, N. K. Jemisen, Ellen Kushner, and others have explored class and race as well as gender. In general, says the marvelously outspoken author/blogger Foz Meadows, this is a community “actively concerned with questions of representation and diversity.”

That’s because, at heart, SF/F is populated by dreamers. That is the nature of fantasy. And while some fantasy is “forward-looking technologically and backward-looking socially,” in the words of Kushner (whose 1987 breakthrough, Swordspoint, featured a gay male couple), not all of it is. “When you’re dealing with SF, you’re dealing with possibilities and possible futures,” she says. Trailblazing, that is, for all of us. As Kushner concludes, “Until you can envision it, you can’t start trying to create it.”

Which is why the women of SF/F are taking up the sword, and why we in the larger arts community should care. If only to win better armor.

Clea Simon, author of three nonfiction titles and 13 mysteries, knows that good books defy genre. She may be reached here.