You are here: Home / Featured / Bluegrass Album Review: Molly Tuttle — Blurring the Boundaries between the Folksy and the Exploratory

Crooked Tree is the Molly Tuttle record we’ve been waiting for, one that is firmly rooted in bluegrass, but imbued with her own sharp style as a guitarist, singer, and songwriter.

Crooked Tree, Molly Tuttle & Golden Highway. (Nonesuch Records) The album will be released on April 1.  Tuttle brings Golden Highway into the Bull Run in Shirley, MA on April 3 at 7:30 p.m. 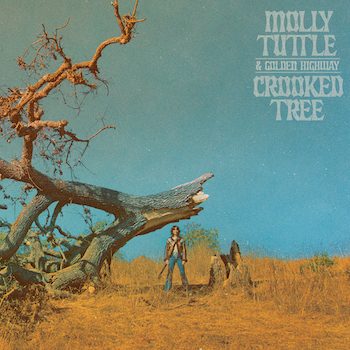 Molly Tuttle is a fierce musician, twice named guitar player of the year by the International Bluegrass Music Association as well as the 2018 recipient of the Americana Music Awards’ Instrumentalist of the Year honors. But, wary of being claimed by any one musical camp, Tuttle infused her fleet-fingered picking into an up-to-date singer-songwriter style on 2019’s When You’re Ready. And then, in 2020, doing what she could during a year of pandemic lockdown, Tuttle released an album of cover songs but set aside the traditional folk and bluegrass numbers she knows and served up hot takes of songs by The National, Rancid, Harry Styles, FKA Twigs, the Rollings Stones, the Grateful Dead, and others from well outside the bluegrass tradition.

Perhaps feeling she had proved her point that, as an artist, she is deeply knowledgeable and respectful of tradition but is not bound to it, Tuttle has now confidently released an album that fuses her bluegrass talent with her modern sensibilities. Crooked Tree is a perfect example of  — for lack of a better term —  the “next grass” movement that Tuttle’s buddies Sierra Hull and Billy Strings can also be considered a part of.

Accordingly, Hull and Strings are among the many guests that Tuttle lined up to perform on Crooked Tree, a record she co-produced with renowned Dobro player Jerry Douglas, who emerged in the ’70s “newgrass” scene and has been among the crew that has been navigating the routes through traditional and contemporary influences.

Yet with all of this firepower, what remains most striking about Crooked Tree are the songs and arrangements themselves. Tuttle is wisely content to the stories in the tunes unfold, twist, and turn to great effect, whether regaling us about a bad ass cowgirl in “Side Saddle” or plunging into the treacherous, and unexpected, depths of the ballad “The River Knows.”

Tuttle covers a lot of ground with the album’s 13 tracks. The title song is a parable celebrating nonconformists; “Big Back Yard” riffs on Woody Guthrie’s “This Land Is Your Land”; “San Francisco Blues” laments the way artists are being pushed out of Tuttle’s Bay Area birthplace; and “Grass Valley” is a bit of an autobiographical origin story for an artist whose guitar playing skills were nurtured at California hootenannies, later to be refined at Berklee College of Music, and now firmly a part of the Nashville scene.

Tuttle and Strings, who on occasion performed together when both were starting out, have a memorable reunion on “Dooley’s Farm,” a song that updates The Dillards’ tale about a moonshiner, turning it into a song about an outlaw cannabis grower (with a nice surprise ending).

“Over the Line,” the collaboration between Tuttle and Hull, is a great example of how a blaze of string picking can elevate a playful lyric to something more memorable.

Tuttle is right in tune with the bluegrass tradition of singing heartfelt and plain-spoken songs while engaging in some awe-inspiring instrumental acrobatics, blurring the boundaries between the folksy and the exploratory all the while establishing a distinctive artistic identity.