Jake Cohen is “modern” in that he takes a contemporary approach to spreading the gospel; he is an expert at using social media. 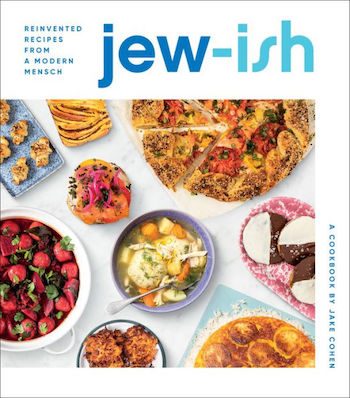 Jake Cohen boasts of being a “modern mensch.” This is a bit of a stretch. As I understand it, a mensch is an honorific title one receives — you can’t self-anoint. To be deemed a mensch, the assumption is that others recognize that you possess an abundance of menchlichkeit: humility. In short, the word describes a particularly “human” human being, a person who is devoted to performing unselfish deeds. A cookbook author doesn’t quite qualify. It would be closer to the truth to accept Cohen’s additional description of himself as a “nice Jewish boy,” or the Yiddish word boychick. He is young (although not actually a boy) and he brings plenty of youthful enthusiasm to his chosen craft  — cooking, baking, and writing about the joys of Jewish cooking (and feeding others).

The book does not aspire to be more than an accessible guide for those of us who grew up with Jewish food, as I did, at the same time offering a welcome to the uninitiated who may be attracted to the cuisine and want to learn more about its roots. Specifically, the lowdown on kashruth (or keeping kosher), which originated thousands of years ago and is practiced as law today by Jews around the globe. I grew up in a kosher home, and there were more pluses than minuses to the practice. Yes, there was a tendency by the cooks in my family to stress out over every step of the kosher cooking process — no one ever went hungry waiting. To his credit, Cohen includes a chapter on Judaism and how to bless wine and food before a meal.

Cohen is “modern” in that he takes a contemporary approach to spreading the gospel; he is an expert at using social media. He has his own website, Wake & Jake, and cranks out food pieces for Time Out New York and numerous other online publications. He has posted legions of photos and videos of his smiling countenance on Instagram, Facebook, Twitter. You get it — he’s a kibitzer of an influencer.

Which means he overlooks Jewish cooking’s deeper roots. As defined by cookbook author Joan Nathan, Jews take great pride in their faith and this pride is reflected in their food. They were the original foodies. The Jews were a nomadic people, and when they were expelled from their various homelands they were forced to scavenge for ingredients in their adopted homelands to serve as substitutes for the real thing for their meals for the Sabbath and for the holidays. This innovative spirit has led to marvelous discoveries that many other cultures have since adopted for their cuisines. Nathan writes about the tiny Jewish population in El Salvador, for example, who, due to the scarcity of potatoes, substituted the use of yuccas to make their Hanukkah latkes.

Boychick Cohen casts himself as one who embraces new cooking paths by bringing unexpected ingredients and flavors together for his recipes. He grew up as a secular American Jew and married Alex, who hails from Persian ancestry; his preference for melding ingredients pays particular homage to their union. Cohen uses Iraqi spices like amba and baharat, He flavors his dishes with za’atar, an Arabic spice blend, and urfa biber, or Turkish sun-dried peppers. And, he also has recipes that use traditional Jewish ingredients like matzo meal, date syrup, and pomegranate molasses, which Jews have been cooking with for centuries.

I baked a loaf of his “Jake’s Perfect Challah.” It did not come out “perfect.” This was not Jake’s fault but my own because I’m all-thumbs when it comes to deftly braiding dough. But the final product was very tasty, indeed. I want to whip up some of his kale tabbouleh salad that he writes that he learned to make in Israel. He adds, with his characteristic enthusiasm, that he looks forward to further tinkering with the recipe by including bulgur now that he’s back in New York.

Readers will find recipes for chicken soup with matzo balls, a traditional Jewish dish, but Cohen also includes variations on that classic theme by adding saffron and grated lemon zest — it gives the concoction a bit more kick. (Though far from a mother’s love.) There are numerous vegetarian offerings in the book; one recipe that looks very promising is za’atar-roasted eggplant, which includes date syrup, mint leaves, pomegranate seeds, and lemon zest.

Nathan believes that evolution is at the heart of Jewish food. When I interviewed her a while back, Nathan marveled at what she called the emergence of “newish Jewish” cooking, as well as restaurants that draw on ingredients found in the American south, the Middle East, Asia, and India. Cohen is the embodiment of this “newish Jew-ish” approach, and Nathan probably would find him to be a bit of a marvel. He’s not afraid to take risks for the sake of being different, but he also understands that not everyone is comfortable eating on the wild side. The result is that Jew-ish will appeal to chefs who are just discovering this marvelous type of cooking — and are willing to take calculated baby-steps toward nosh nirvana.