You are here: Home / Books / Book Review: “Immigrant Architect — Rafael Guastavino and the American Dream,” a Splendid Book about Design for all Ages

A book to cheer you in these challenging times, providing destinations to explore when this pandemic is over, and a story to inspire the more inventive young among us. 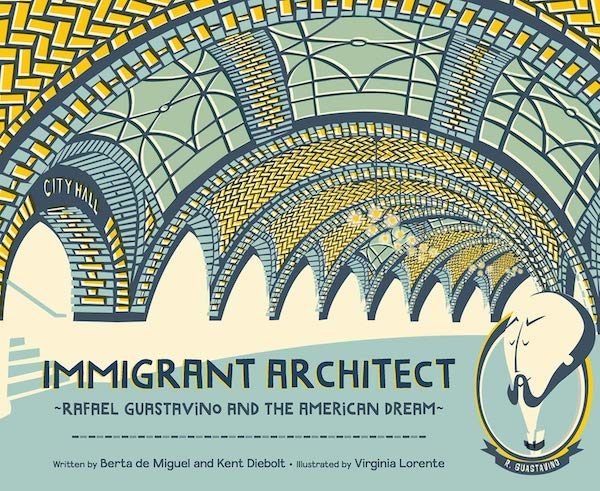 This is a charming book about Rafael Guastavino, whose work as an architect and engineer left a unique and important legacy on the built environment in the United States. His cleverly designed tiles, known as Guastavino tiles, have been used to create more than a thousand domes and vaults all over the country. What is perhaps the most fascinating part of the story is that although the Guastavino Company had been working until 1960, everything about his work fell into obscurity until 1965 when an architecture professor at Columbia University named George Collins realized that the room he was sitting in had a domed ceiling whose provenance was totally unknown. When he started investigating he discovered the abandoned Guastavino factory near Boston; in the dumpster he found hundreds of architectural drawings, which are now archived in the Avery Library at Columbia. Thus began the great wave of research about Guastavino, which, as the wife of a structural engineer, I knew about and followed.

And now we have this splendid book for all ages that is a well of information about the design of the tiles, and where you can find them, like the Oyster Bar in Grand Central, St. John the Divine, Ellis Island, the Elephant House at the Bronx Zoo, as well as more far-flung places like the Nebraska State Capitol and the Basilica of St. Lawrence in Asheville, NC.  But what makes the book so extraordinary and so appealing are the fabulous illustrations by Virginia Lorente. Her conception of the two Rafaels — the senior Guastavino and his son, Rafael Jr. — is utterly engaging, and equally so are the often whimsical drawings of their adventures and the brilliant buildings they created.

So here is a volume not only about architecture and innovation but one that is also an immigrant story about loss of home and language and starting over with no resources or the ability to speak English. Rafael tells of their early struggles in the context of American history and, in a wonderfully surprising way, reinforces the notion that timing is everything. After America had endured the Great Chicago Fire in 1871 builders needed to find a solution to the pervasive problem of fire in their fast-growing cities. And here are the Guastavinos with their inventive vaulting system which made “buildings strong, fireproof, and beautiful.”

One of the great strengths of this seemingly modest book is all the information it contains — about the strength of vaults (starting with the ubiquitous egg), about United States population growth, about the struggles of immigrants in wary communities, about financial success and loss, about preserving the past. Universal themes that matter, especially now. And also practical, if you follow the little tour of Manhattan given at the end.

What a perfect book to add to your library if you are an architecture buff or just someone interested in American history, or have grandchildren who are, by their very nature, curious. For, as Rafael says at the conclusion of Immigrant Architect, “Books, too, are vaults. They keep the past alive.  Know this: YOU ARE OUR FUTURE. AND KNOWING AND PROTECTING THE PAST WILL HELP YOU CREATE THAT FUTURE.” A book to cheer you in these challenging times, destinations to explore when this pandemic is over, and a story to inspire the more inventive young among us.