You are here: Home / Books / Book Review: “Physics & Dance” — The Intelligence of Movement

The authors let dance serve as a way of embodied knowing — an intelligence that can unlock an understanding of physics’ theories and abstractions. 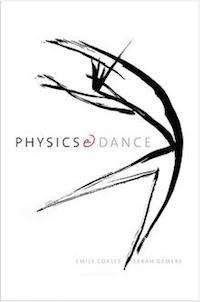 Back when I was in college, there was a class called “Physics for Poets.” I don’t recall if that was really the title in the course catalog — I suspect not — or just what we called it around the dorm. It was, however, the way to fulfill your science requirement without having to manage anything as challenging as mathematical equations.

Physics & Dance was developed as an undergraduate course at Yale University co-taught by (no surprise) a dancer and a physicist. Emily Coates, a former New York City Ballet dancer created Yale’s Dance Studies curriculum in 2006: I remember seeing her dance, beautifully, as part of Mikhail Baryshnikov’s White Oak Dance Project and in Yvonne Rainer reconstructions. Sarah Demers is an experimental particle physicist who works at CERN’s Large Hadron Collider when she isn’t in New Haven. Both accomplished women apparently were committed to bridging the presumed gap between the arts and sciences, and are believers that dance was not too fuzzy nor physics too sterile to explore under a shared rubric. Their mantra, they write, has been “physics and dance share equal creative, rigorous, intellectual research power.” Refined over four years with the help of 85 students, this a course I wish I had been able to take during my undergrad years, and a textbook destined to stay in print forever.

It’s been almost 40 years since Howard Gardner suggested that humans learned through “multiple intelligences,” and that each of us tend to favor one of eight learning styles. Linguistic intelligence (being “word smart”) and logical-mathematical intelligence (“number and reasoning smart”) had pretty much cornered the market for “reading and ‘riting and ‘rithmetic,” but, Gardner argued, it was also possible to be intelligent in other ways.

In my admittedly limited experience, it has seemed that in school settings, body-kinesthetic intelligence — the embodied way of knowing that is foundational to dance — has been honored primarily insofar as it brings up scores in the other two, dominant categories. (If I hear one more time that being able to count in dance rhythms improves students’ math scores I think I’m going to scream.)

Coates and Demers are not the first dance-physicist pair to write a book — back in the 1990s, physicist Kenneth Laws worked with American Ballet Theatre star Cynthia Harvey to explicate the mechanisms of the ballet pas de deux, a model of collaboration the authors acknowledge. Nor are they the only people to notice that scientists spontaneously gesture to share concepts with laypeople: Liz Lerman’s 2010 The Matter of Origins was based in part on interviews with physicists at CERN and elsewhere.

But Coates and Demers have put Gardner’s insight about body-kinesthetic intelligence into a polished, curriculum-ready form where the questions can be expressed either as an equation or as a choreographic phrase — or both. It even includes problem sets in the appendix.

The volume is organized according to classical principles of movement: gravity, force, motion, friction, momentum, turning (a subcategory of momentum) and then concerns itself, Merce Cunningham-like, with energy, space, and time. The principles of physics offer a way to understand why human movement (mass, energy) behaves in predictable ways, and how motion is constrained and shaped by the environment (gravity, space, or as they describe it, “the air, the ground, the material surfaces with which we interact daily”). In some sense, this is a more sophisticated version of the introductory physics fable of how Newton discovered gravity when an apple fell on his head. Talk about embodiment!

More impressively, though, the authors let dance serve as a way of embodied knowing — an intelligence that can unlock an understanding of physics’ theories and abstractions. The first page of Physics & Dance invites the reader/student to lie down on the floor to consider the nature of gravity. Knee bends — pliés in ballet, ardhamandaka in classical Indian bharatanatyam — are ways of understanding the relationships between force and acceleration: “as you start to bend your knees, the force that the ground can exert on you is reduced. At least for a time, you will accelerate toward the floor.” There’s an equation for that. Special relativity and the idea of reference frames can be imaginatively entered by “picture[ing] dancing within a studio that has been lifted onto the bed of a very large train and is moving quickly down a curving track over a hilly landscape.” For those who find it hard to envision being an astronaut in a space capsule circling the planet, this more domestic vision of a dance studio on wheels may be just the ticket.

The alternation between references to dance techniques, choreographers, and dance history, and references to physics, both Newtonian and newer, are wide-ranging but never become bewildering. Comparing Robert Wilson’s Einstein on the Beach (how could they have resisted?) to “time dilation in the lifetime of particles” may not be the first analogy that comes to mind in ordinary conversation, but Coates and Demers make the comparison seem not only natural but obvious. Once that makes sense, calculating the lifetime of muons (2.2 microseconds) and how muons appear when travelling at close to the speed of light is just a matter of understanding how the equation is structured.

The black and white photographs by Jessica Todd Harper and hand-drawn diagrams by Eric Jiaju Lee that illustrate Physics & Dance seem to designed to appear unintimidating and off-the-cuff, as if shot with a low-res camera and swiped off a white board, none of the elegantly heroic Vitruvian Man imagery you’d expect. But I’d be remiss if I neglected to applaud the fact that the photographs in this volume include dancers using wheelchairs as well as able-bodied Yalies and alumni. We are all masses of energy subject to gravity, inhabiting space and time. We all, in one manner or another, move. The science of physics encodes some of the truth that makes it so.