You are here: Home / Books / Culture Vulture at the Chester Theater

If you’re looking for a magical evening of summer theater, get out your map and drive to the Pioneer Valley village of Chester (pop 1100) where the Chester Theater is now celebrating its 20th season. 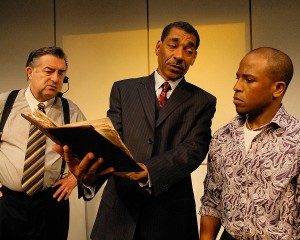 Housed in a small, picturesque Town Hall that looks like a stage set itself, this deceptively modest company specializes in provocative contemporary work that has been making its way to Off-Broadway and across the country.

If you’re looking for a magical evening of summer theater, get out your map and drive to the Pioneer Valley village of Chester (pop 1100) where the Chester Theater is now celebrating its 20th season. Housed in a small, picturesque Town Hall that looks like a stage set itself, this deceptively modest company specializes in provocative contemporary work that has been making its way to Off-Broadway and across the country.

I saw the world premiere of “Railroad Bill” on the day President Obama had a beer at the White House with Professor Henry Louis Gates and Sergeant James Crowley — a coincidence that both contextualized and enhanced TJ Edwards’ fast-paced farce about racism, ethnic stereotypes, materialism and political correctness in America.

A unlikely pair of literary agents — a loquacious Jewish hustler named Abe Isaac and Jessie, his earnest African-American intern from Iowa — get an unsolicited call from a very “tanned” or “mixed race” young woman from Florida named Samantha. Rooting around in the cellar of a neighbor’s demolished home, Sam has discovered an unpublished memoir by Bill McCoy, a.k.a. Railroad Bill, a train robber who stole from the rich and gave to the poor. Like the real-life heroic faux memoirs plugged by well-meaning talk show hosts like Oprah (whose name figures in the agents’ marketing plans) this manuscript is purportedly of historic value. It is the journal of “the greatest train robber of all time,” killed in 1896, the closest thing to a “black Robin Hood.” 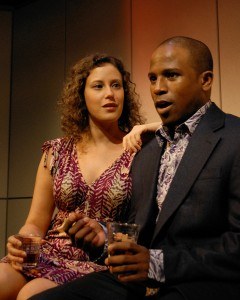 Agent Abe Isaac (It’s your moral duty to seek equitable compensation”); the intern from Des Moines; and Samantha are conspiring at cross-purposes to make as hot a deal as they can when the purported head of an African-American archive with a long fancy name shows up to claim the manuscript for his foundation. Railroad Bill is “a true hero to our people,” Mr. Jones — as he is later revealed to be — declares. Since “the fabric of our past is threadbare,” and “You cannot put a price on this document.”

What results is a send-up of the kind of racial interactions and exchanges that led to the White House meeting, written with such even-handed sarcasm that all parties come out equally badly. Although the script needs some fine-tuning, TJ Edwards has succeeded in setting into frantic motion a set of compelling and corrupt dramatic personae. The two literary agents are inspired creations, everything but literary, sprinkling their dialogue with malapropisms, and illustrating an all too dismally accurate publishing reality. Jones is a fascinating character: a con man who might in another time have been leader of a Christian congregation but is instead a Muslim and not-for-profit foundation executive. Racially ambiguous Samantha is as driven by greed as the other characters, held the least dramatic interest or me and could use more characterization by the playwright.

The company of Equity actors was fun to watch. Charles Stransky was ebullient and overbearing as the manically upbeat literary agent in prusuit of The Deal. Warren Jackson was convincing as his idealistic and eager to please Intern. Terry Alexander played an intriguing, somewhat sinister and multi-layered Jones; Melissa Miller did what she could with Samantha.

Regge Life’s direction was brisk and fast-flowing; the simple set, lighting and sound seamlessly integrated. Unlike other productions I’ve seen this summer, Railroad Bill had me hooked from beginning to end. I laughed out loud in the theater and reflected on the interface of American literary life, race and relentless obsession with money all the way home.

In its macho posturing, “Railroad Bill” evokes the plays of David Mamet but oddly enough in this small bucolic theater, I found myself remembering the broad insanity of “The Producers” and “How to Succeed In Business Without Really Trying,” as well as the literate way “Beyond the Fringe” transformed current events into theatrical entertainment. I look forward to hearing more of TJ Edwards and will certainly go back to CTC to see its forthcoming productions.

“Railroad Bill” runs through August 9. The CTC is just off Route 20, eight miles east of Jacob’s Pillow Dance Festival. For schedule and directions