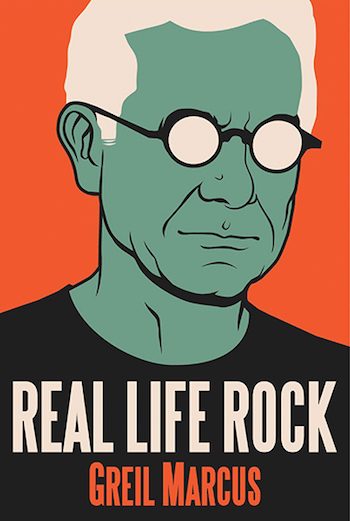 In February 1986, music/cultural critic Greil Marcus began writing the column “Real Life Rock” for The Village Voice. The feature, which borrowed its title from the name of an album by British post-punk band Magazine, had existed in a different form since 1978, but it was with the Voice that it took the shape of a top-10 rundown of everything and anything under the sun, with a focus mostly, though not solely, on rock music. More than simply lists, the top 10 columns offered roughly a paragraph or less each on 10 slices of life that caught Marcus’s fancy. The subjects could be albums, songs, bootlegs, art exhibitions, advertisements, novels, fanzines…anything really.

The column moved to Artforum in 1990, then to Salon in ’99, City Pages in ‘03, Interview in ‘06, and The Believer in ‘08. As “Real Life Rock” traveled and evolved, it expanded its scope, adding even more coverage of art, movies, politics, and television. The lengths of some entries grew, though, at its heart, the column was always offering quick hits. In the fall of 2014, “Real Life Rock” moved to the Barnes & Noble Review, where it can be read today.

Real Life Rock: The Complete Top Ten Columns, 1986–2014, published this month, collects all of these pieces up to and including those written for The Believer. Even Marcus fans who have never read a single one of these columns will recognize some of the writer’s favorite topics from Dada to Dylan to punk to Randy Newman to the legend of Stagger Lee, all of which make multiple appearances through the book’s 500-plus pages. If that page count seems daunting, fear not. There isn’t an entry you’ll want to skip.

Of a 1987 album by the Monkees he quips, “Not terrible, even if they do play their own instruments; at least they don’t write their own songs.”

And of the 1989 Elvis Costello song “Tramp the Dirt Down” (described as an “ode to the death of Margaret Thatcher”) he writes, “To make true political music, you have to say what decent people don’t want to hear.”

The early columns especially are filled with gems like these, though the book’s greatest joys come from progressing through the years and seeing old friends pop up from time to time.

British punk pioneers the Mekons and riot grrrl legends Sleater-Kinney are two bands that make multiple appearances in the book (in fact, Real Life Rock is dedicated to both groups), and the entries on the Mekons, in particular, are always welcome. Too many pages without them and you start to say to yourself, “Haven’t heard from the Mekons in a while. I wonder what crazy shit they’re up to.”

Another regular is Mary Weiss, lead singer of ‘60s girl group the Shangri-Las. In his September 17, 2001, column, Marcus writes about Weiss’s appearance in the A&E documentary The Hitmakers: The Teens Who Stole Pop Music. Two weeks later he returns to her, asking her to share her experience of 9/11.

“So many people shared these experiences,” she wrote to Marcus. “I don’t know why anyone would care to hear my story.”

Despite her reservations, Weiss gives her account, writing that she left a meeting she was attending near the Twin Towers (she was working for the company Furniture Consultants at the time) and saw the first plane, then the second plane, hit. She writes about running for safety when the first tower begins to fall and the bravery of the emergency responders. The past 14-plus years have been filled with stories similar to Weiss’s, but her description of what she saw that day is still shattering. Maybe it’s because we feel we know her and that she’s a part of our lives. After all, this is the woman who sang “Leader of the Pack.” Or as Marcus puts it in his explanation for why people would in fact care to hear her story, “Maybe [it’s] because [Weiss] writes in a voice you can hear echoing from the songs she sang, which people still carry with them.”

This isn’t the only time we hear from Weiss in Real Life Rock. In Marcus’s October 2011 column published a few months after the death of Amy Winehouse, he begins by examining the impact of the Shangri-Las on the late singer. He touches on how the Shangri-Las’ “Remember (Walking in the Sand)” seeps into Winehouse’s “Back to Black,” and the influence of the girl group on “Rehab” and Winehouse’s 2008 Grammy performance of “You Know I’m No Good.” Later in his entry, he discusses the music of the Shangri-Las and the role of Mary Weiss as the group’s vocalist. “With anyone else but Mary Weiss as a lead singer,” he writes, “the doom in Shangri-Las songs might have turned into a joke, but it never happened…Their songs, like Winehouse’s, were all locked doors, doors that locked you out or that you locked yourself from the inside.” This is prime Marcus. There’s nobody better at finding the connections between things and weaving them together, and if this was all he did in the October ’11 column it would be more than enough. But in the middle of his analysis, he lets our old friend Weiss speak.

“She could not stand fame any more than I could,” she says of Winehouse. “I related to her so much it is a bit scary….I will never understand why people get off kicking people when they are down and need help. How could that possibly make you feel better about yourself?”

There’s no acceptable answer to that question, which is really the only answer anyone needs. It’s enough to send you to a bottle. Thankfully, sitting in the 10 spot of this very same column are our pals the Mekons. They have a new album out, more than 30 years into their career, that Marcus writes “contains…the whole of the band’s thirty-four-year stumble-and-fall career” and “rousing odes against all odds.” It’s hard not to be impressed with their perseverance and think that in life, there are some happy endings.