People complain about how no one takes literature seriously these days. Tell that to the millions of people who are participating in Bloomsday celebrations worldwide today, the day the novel takes place. 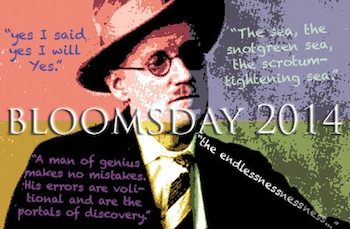 I have a friend from college that I never see anymore who always texts me once a year to wish me a happy Bloomsday. It’s the kind of thing I wish everyone did. Readers need holidays, after all, and strangely enough there really aren’t that many. It’s a wonderful thing that there’s a day where people dress up like characters from a book, read it out loud, and reenact specific scenes. People always complain about how no one takes literature seriously these days. Tell that to the millions of people who are participating in Bloomsday celebrations worldwide today, the day the novel takes place.

Part of the reason for this has to be because Ulysses, for all the hoopla over the book’s annotations and sentences that go on for pages and arcane references and general verbal hijinks, is really one of the more earth-bound volumes ever written. It’s not over anybody’s head, if you look at it the right way. The fact that, in terms of narrative, not much happens is actually a blessing rather than a curse. After all, it’s a lot easier to order the sandwich Leopold Bloom gets for lunch at Davy Byrne’s pub than it is to hunt whales or stage a battle in heaven. And god help us all if people start some kind of Cormac McCarthy cult.

I get why people don’t get Ulysses. I used to lug the thing around before I ever really knew what the hell it was, back when I was a curious kid in high school and skipped gym class to go to the library. I’d open random pages and stare at them, mesmerized by the words and understanding nothing of what I saw. It was like reading a book in a foreign language. This isn’t necessarily a bad thing – there are plenty of books you just can’t make heads or tails of, no matter how many people you want to impress. Mark Twain had a point when he said that a classic is a book that everybody wants to have read and nobody wants to read. But Twain is a good example that there are gaping holes in his witticism. After all, if it were true, nobody would have read Huck Finn in the first place.

Many didn’t get Ulysses when it was first published, but though everybody had a reaction, especially to the purported ‘dirty’ parts. Hemingway, Nabokov, and Einstein signed a petition proclaiming it was the real deal. F. Scott Fitzgerald once offered (it is rumored) to throw himself out of a three story window in tribute to Joyce. In front of the great man no less (the author declined the honor). Yet Fitzgerald apparently didn’t get beyond the first hundred pages. Virginia Woolf dismissed Joyce as a show-off, though I can’t help but notice the fact that Mrs Dalloway uses a similar day-in-the-life plot frame and gets so much of its power from the flicker and glow of internal consciousness. The great Flann O’Brien one cracked that “I declare to God that if I ever hear that name Joyce one more time I will surely froth at the gob.” He also participated in the first-ever Bloomsday celebration, which ended in everyone knocking off early and getting rip roaring drunk at the nearest pub. The novel was categorized and banned as pornography in several countries and it was also given the top slot for English-language fiction in the 20th Century by The Modern Library. Interested yet?

I still maintain that all you need to do to enjoy Ulysses is flip through the pages at random and light on something that catches your eye. Joyce famously wanted to keep the professors guessing, packing in countless puns and allusions and symbols and such, and he certainly got his wish. But his primary goal was to spellbind readers. The quickest way to get the crackle and the thrill of the language is to read it out loud. The best way to immerse yourself in a text like this is to dive into the sentences and float around in them. I’ve always been a language-over-plot type of reader, and I suspect there are plenty of us. Plot is fun, but more readers than we think remember how writers say something more than what they say. I find that when readers recommend fiction, plot summary drives their enthusiasm least.

Here’s a passage in Ulysses I’m particularly fond of. Our hero Leopold Bloom is eating his lunch of gorgonzola cheese and a glass of burgundy at Davy Byrne’s pub, He remembers a romantic moment with his wife from years ago and tries not to dwell on the fact that she will be cuckolding him later on that afternoon. It‘s a bit long, granted, but also not quite like anything else you’ll ever read:

Glowing wine on his palate lingered swallowed. Crushing in the winepress grapes of Burgundy. Sun’s heat it is. Seems to a secret touch telling me memory. Touched his sense moistened remembered. Hidden under wild ferns of Howth. Below us bay sleeping sky. No sound. The sky. The bay purple my Lion’s head. Green by Drumleck. Yellowgreen towards Sutton. Fields of undersea, the lines faint brown in grass, buried cities. Pillowed on my coat she had her hair, earwigs In the heather scrub my hand under her nape, you’ll toss me all. O wonder! Coolsoft with ointments her hand touched me, caressed: her eyes upon me did not turn away. Ravished over her I lay, full lips full open, kissed her mouth. Yum. Softly she gave me in my mouth the seedcake warm and chewed. Mawkish pulp her mouth had mumbled sweet and sour with spittle. Joy: I ate it: joy. Young life, her lips that gave me pouting. Soft, warm, sticky gumjelly lips. Flowers her eyes were, take me, willing eyes. Pebbles fell. She lay still. A goat. No-one. High on Ben Howth rhododendrons a nannygoat walking surefooted, dropping currants. Screened under ferns she laughed warmfolded. Wildly I lay on her, kissed her; eyes, her lips, her stretched neck, beating, woman’s breasts full in her blouse of nun’s veiling, fat nipples upright. Hot I tongued her. She kissed me. I was kissed. All yielding she tossed my hair. Kissed, she kissed me.

We start with a couple of specks on a windowpane, a world of senses and emotions suddenly opens, and then, just like that, we’re back to the buzz of flies in a pub in the middle of the day. I love the way we travel through time as one man relives the memory of the afternoon he asked his wife to marry him. It’s a moment that changed their lives forever and is connected to so much internal and external complexity for both of them throughout the text. Molly, his wife, will remember this moment differently when we reach her famous final passages (“yes I said yes I will yes“). It might sound corny or overly sentimental to focus on this particular moment, but when you get right down to it, even the greatest moments of your life will wind up being memories in the end.

What’s sadly true of religion is happily true of fiction – like the fairies in Peter Pan, you gotta believe it to make it real. This is what Faulkner meant when he said that “you should approach Ulysses as the illiterate Baptist preacher approaches the Old Testament: with faith.” The amusing joke in the passage, which I didn’t notice the first time I read it, is that adjective “illiterate.” But Faulkner is being hopeful as well as witty. If you trust in the words you will eventually learn how to read them for yourself. The epiphany is there for the taking, but it’s up to you.

Joyce, of course, had no time for organized religion and got the hell out of gloomy, repressed old Dublin before it hurt him into poetry as it did Yeats. He did, however, spend most of the rest of his subsequent career writing about the place and was known to compare an artist to God. It’s no coincidence that one of Joyce’s major characters is named Daedalus, after the old artificer, the fashioner of labyrinths. One critic once remarked that – next to the intricacy of Joyce’s prose and the wealth of invigorating detail in his work – God himself looks like a hack.

The biggest objection I hear to Ulysses is that it’s annoying (and more than a little presumptuous) for Joyce to require that the reader consult another book (or books) to make sense of the novel. Well, if life came with footnotes, wouldn’t you want to read them? For me, the magic of Ulysses is connected to its nervy immediacy – the way that Joyce puts you behind the eyes of so many different people, moving and breathing within the sights, sounds and smells of an ordinary day in an ordinary city a little less than a hundred years ago. Joyce’s stated ambition as a writer was to write a book that will put the ideal reader into a state of perpetual insomnia, endlessly turning pages and never reading the same book twice. If you could read someone else’s mind you’d probably need a concordance to keep up with all the references, too.

For me, Ulysses is the bright book of life, a kind of secular mythology. The fact that it exists at all is a testament to what’s possible in art, in terms of language and its reflection of human consciousness. Joyce spent seven years painstakingly writing it (in between drinking bouts, of course) one word at a time, not only because he wanted to find le mot juste, but because he wanted to make everyday life extraordinary. In other words, Bloom becomes Ulysses because Bloom is in Ulysses. Joyce once said that if he could get to the heart of Dublin he would capture the essence of all the other cities in the world because “in the particular is contained the universal.” I have always loved that phrase because it strikes at what makes reading so deeply worthwhile and enjoyable. In a sense, Bloomsday is a kind of high holy day for readers. If reading fiction is a way to inhabit the subjectivity of others, and thereby to enrich your own life and mind, then a book that raises this pleasure to the highest of heights is a sacred one indeed.